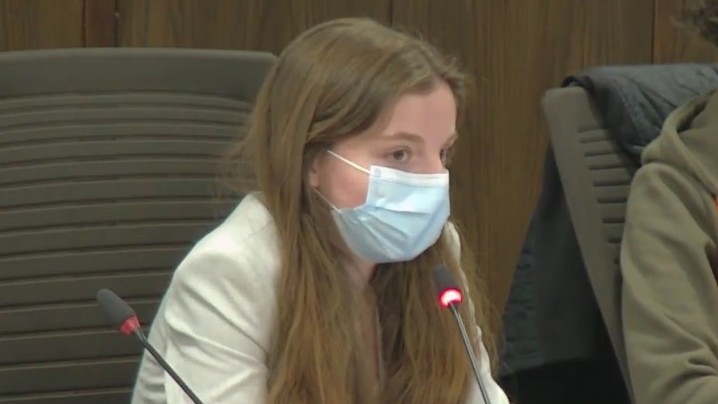 The student member of the District 202 Board of Education says Evanston Township High School failed to take proper action against an ETHS band color guard coach despite complaints from students at the school.

The coach, 63-year-old Lorenzo Medrano, was charged in September with child seduction at LaPorte High School in Northwest Indiana where he had also worked, for allegedly fondling a 16-year old girl on repeated occasions in 2019. Medrano was fired in March 2020 by the LaPorte school.

At Monday night’s District 202 board meeting, student member Barbara Tomaradze, a junior at ETHS, wrapped up comments on other issues, took a deep breath, and then told the adult members, “There’s another thing I don’t want to talk about but I feel nobody else will if I don’t.”

Tomaradze said Evanston students have seen news articles about the case in Indiana.

“It’s known that students at ETHS complained about this coach,” Tomaradze said, “but other fellow coaches protected him and the complaints were dismissed and he kept working here.”

Tomaradze said she knows the school’s reputation is important, but she added, “These are our lives,” and students want to make sure nobody is jeopardized by action or inaction by ETHS.

“I’m not sure what went wrong with the complaint or who’s at fault or whatever,” the student board member continued, “but I’m sure something did go wrong.”

“I fear for the other students who were put in danger,” Tomaradze stated, “because the complaint was not followed through with as much concern as we see it should have been.”

She said students are “scared and worried” that ETHS is going against its message of being a place where students are safe and can bring up concerns and fears.

Board Chair Pat Savage-Williams responded that “on behalf of the administration, we heard what you are saying and we will respond.”

Savage-Williams said the board is not making excuses. “I appreciate your courage and your sharing,” she told Tomaradze.

In September, after Medrano was charged in Indiana, District 202 spokesperson Takumi Iseda issued a statement to Evanston Now which said, “We are aware of the charges in another state against Lorenzo Medrano. Medrano is currently not working with any ETHS students and he is not working at ETHS pending the results of the investigation.”

In the LaPorte police report, Medrano denied the charges and said he only had a regular teacher-student relationship with the alleged victim.