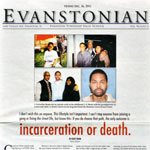 Evanston Township High School's student newspaper, The Evanstonian, has been named a finalist for a Pacemaker Award by the the National Scholastic Press Association.

The paper was one of 55 publications nationwide selected for the honor from among 322 entries.

In addition, former Evanstonian editor Casey Digan, Class of 2012, was named an individual award finalist in storytelling in print for his feature story "Incarceration or Death."

It's the 85th year of the NSPA contest. Entries this year were judged by the staff of The Sacramento Bee, based on coverage and content; quality of writing and reporting; leadership on the opinion page; evidence of in-depth reporting; layout and design; and photography, art and graphics.

The awards will be presented at the Journalism Education Association Convention in San Antonio on Nov. 17.

“I am so proud that Casey's story will be recognized out of thousands of stories from all over the country,” said The Evanstonian's faculty advisor, Rodney Lowe.