Adam Morton also received a third place medal for his performance on the Economics Exam – which was one of the competitive activities that made up his overall competitive event.

Siegel’s first-place win qualifies him to be one of three students representing Illinois to compete in the Principles of Finance event at the DECA International Conference to be held in Salt Lake City, Utah, late next month.

Siegel, Hosman, and Morton were among 14 ETHS students who attended the state conference, where they competed against 1,000 other students attending from schools all over the state of Illinois. 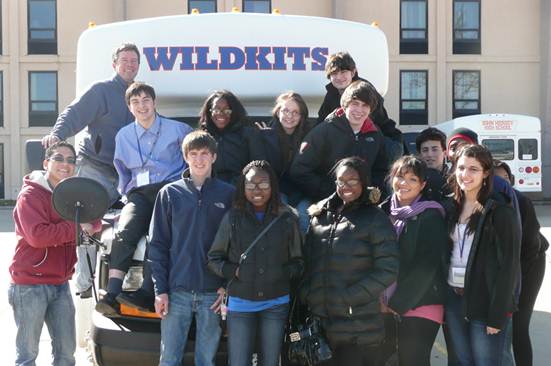 Students from ETHS who attended the DECA state meet in Decatur.

A number of ETHS students were recognized with Awards of Excellence certificates for achieving a benchmark score in one or more of the four competitive activities that made up their respective events: They included ETHS seniors Sara Claire Gaspard, Toni Maxwell, Adam Morton, Shamir Villeda, and Everett Wood and ETHS juniors Candelaria Alcat, Maxandra Cadet, Emily Hosman, and Connor Siegel.

DECA is an extracurricular activity for students interested in business, marketing, and entrepreneurship. Students compete against students from other schools in business role play events and they can also develop a business oriented project to present at the conference, according to Gary Haller, one of the DECA advisors at ETHS.

“DECA competition requires students to be able to think on their feet and be comfortable speaking in front of people," said Dave Feeley, DECA advisor. "The judges at DECA are professionals in the business world.  They score the students based on their handling of the role plays.  Their scores are added with the results of tests that the students take which also deal with business,” added Feeley.

ETHS DECA President, Sara Claire Gaspard, commented, "Our team was amazing!  Compared to other schools, we had a smaller team, but we really came together as a group to support each other and have an awesome time."