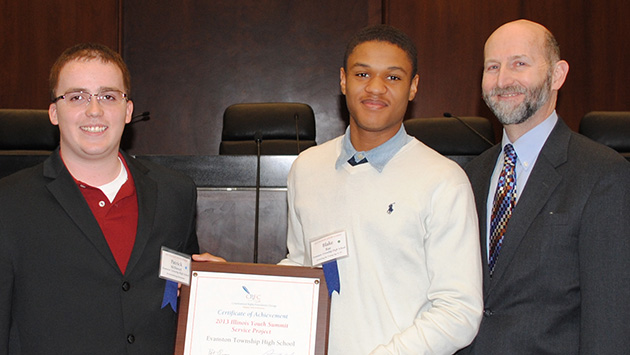 Judge Diane P. Wood of the U.S. Court of Appeals welcomed students to the Dirksen Federal Building where they spent the day discussing controversial public policy questions with their peers and adult policymakers.

Students shared research and made recommendations on decriminalizing possession of marijuana, legalizing physician-assisted suicide and lowering the voting age to 16.

Public officials, issue advocates, lawyers, and law students volunteered their time to serve as panelists and moderators at this year’s event.

Brandon T. Bodor, the Governor’s appointee as Executive Director to the Serve Illinois Commission, recognized each school delegation’s work leading up to the Summit with a service-project award.  Summit students reached more than 5,200 people in their communities.

At the end of the day, students expressed their views in a town-hall style meeting and took a vote to decide the policy questions.

The majority of students voted against lowering the voting age and in favor of allowing physician-assisted suicide in Illinois.  On the question of decriminalizing possession of marijuana, 49 percent voted in favor, 18 percent voted against, and 32 percent recommended legalization as an alternative.

Since 1995, the Illinois Youth Summit has given students an informed voice in discussions about current issues that affect them.

The Constitutional Rights Foundation Chicago works to strengthen American democracy by providing elementary and secondary students with hands-on learning about the Constitution to prepare them for informed civic engagement.