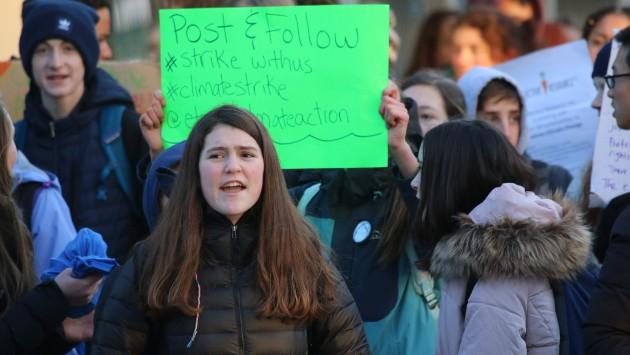 Several dozen Evanston Township High School students braved chilly temperatures and a brisk wind this afternoon to march from the school to Fountain Square downtown to demand a stop to climate change.

Protest organizers speak to the crowd.

“Extreme heat, flooding and storms have become more frequent, more intense and longer lasting in our lifetime,” one speaker said, drawing a supportive round of boos from the crowd.

The event was billed as part of a nationwide “Road to a Green New Deal” tour that was scheduled to involve hundreds of events today in communities around the nation under the umbrella of the Sunrise Movement.

Two older backers of the student protest urged motorists to show their support.

An organizer of the event, ETHS junior Callie Stolar, said the “Walk Out, Chalk Out” rally was designed to promote a 10-year mobilization to stop climate change that she said would create millions of good jobs nationwide and would improve the lives of people in Evanston.

After the speeches, students used pieces of chalk to write climate change messages on downtown sidewalks.