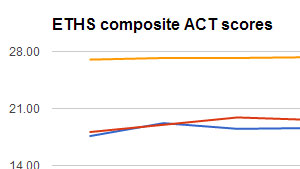 Evanston Township High School students are doing better on the ACT test than they did five years ago, but dramatic differences persist among racial and ethnic groups.

A report presented to the District 202 school board this week shows that white, black and Latino students are all performing at least a fraction of a point better, but that

Latino students showed the most improvement, gaining 1.2 points from the 2008 to 2012 exams. White students increased their average score by 0.6 points. Black students showed a 0.4 point gain.

ETHS students in all groups scored better on the ACT than the national and state averages, but the differences were much greater for white students.