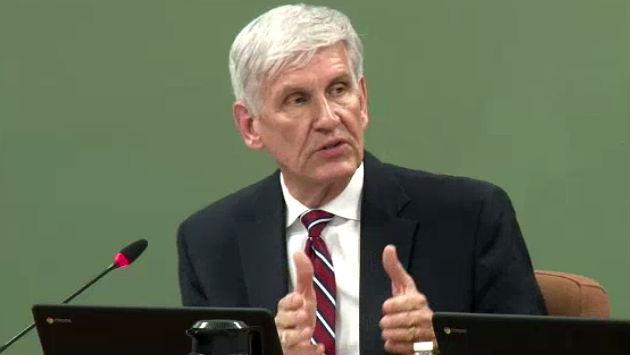 Evanston Township High School Superintendent Eric Witherspoon told the school board Monday night he's set a new policy that will limit staff access to locker master keys in the wake of disclosure of videos that appear to show school staffers using those keys to steal items from student lockers.

Witherspoon said that under the new policy only the chair of the physical education department will have a master key and that the chair and two witnesses will be present before any student locker is opened using a master key.

Witherspoon also denied reports that students had been punished for secretly recording the videos that caught the apparent break-ins.

"We are so thankful and appreciative of the students who were able to gather this evidence," the superintendent said, adding that the school itself couldn't set up cameras in a locker room. "Any chance that we'd be filming minors undressed would create a serious and scandalous problem," he said.

Witherspoon, citing personnel confidentiality rules, declined to specify what action, if any, has been taken against employees implicated in the theft charges.

But he said, "We have always dealt very decisively and directly with any allegations that could be proved against any employee."

"The investigation has to be very thorough and deliberate," Witherspoon said.

And he added, "If indeed we have two employees who have betrayed" the trust placed in them, "that is not in any way a reflection on so many other employees" at the school and "the passion and commitment with which they work every day."

A half dozen parents of ETHS students spoke to the board about the locker theft issue saying it had been a persistent and ongoing problem for years.

Some said they now were embarrassed to have blamed their kids for being careless with their possessions when it now seemed more likely they'd been the victim of crimes.

Witherspoon said thefts have been a problem at the school — as they are at other schools — over the years — but insisted that the school has never ignored the concerns.

"We have over the years caught perpetrators. We've not solve all issues by any means, but many thefts have been solved," he said.

The school, the superintendent said, also has set up a new online reporting system for lost and stolen property that will encourage students to speak with Evanston police officers assigned to the school whenever they believe an item was stolen and not just lost.

Update 6:30 p.m.: In an interview this afternoon with the Chicago Tribune, School Board President Pat Savage-Williams said the board voted as part of personnel actions on its consent agenda Monday night to terminate one employee allegedly involved in the locker thefts, who she declined to name.

The board didn't publicly indicate that it was taking action on the employee during its meeting.

She said the district is continuing to investigate another employee seen on a different video allegedly taking items from a student's locker.