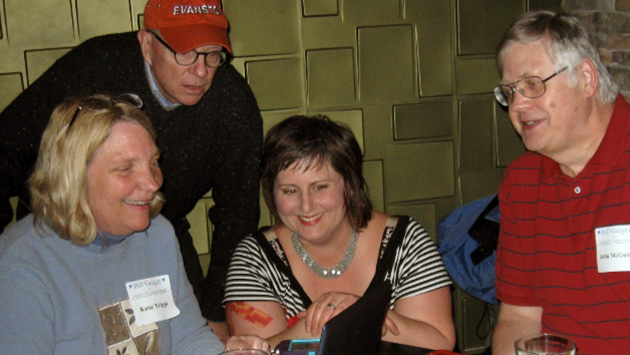 Evanston voters appeared to split the difference in selecting four new members for the District 202 school board from a field of eight candidates.

While the candidates themselves had run independently, some voters tried to align them into two slates — one supposedly more skeptical of the "earned honors" program — the other supposedly more supportive of ideas advanced by the school administration.

As it turned out, two candidates from each supposed grouping were victorious.

One of the newcomers, Doug Holt, said he's pleased with the makeup of the new board, saying it will ask tough questions of the administration and will focus on objective data to determine the success or failure of programs at the school. 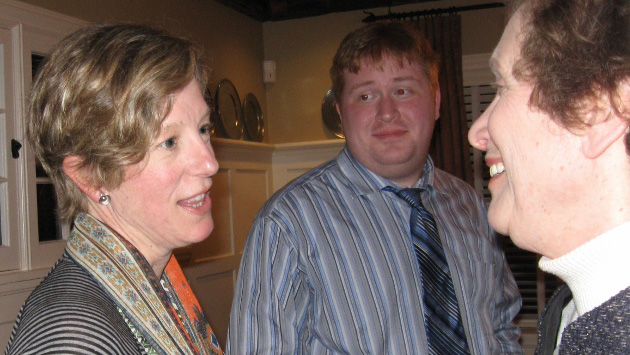 Top: Bill Geiger, in baseball cap checks election returns with members of his campaign team at an election-night gathering at Chicago's Home of Chicken and Waffles on Dempster Street. Above: Gretchen Livingston, left, chats with supporters during a gathering at the home of Alderman Mark Tendam.

Incumbent Gretchen Livingston said she feels the new board will work together as an effective team to accomplish great things at the high school.

And the day's biggest vote-getter, Bill Geiger, said that his position as executive director of the McGaw YMCA, coupled with his new responsibilities on the District 202 board, “will keep me pretty busy.”

We were unable to reach the fourth winning school board candidate, Pat Savage-Williams, on election night.