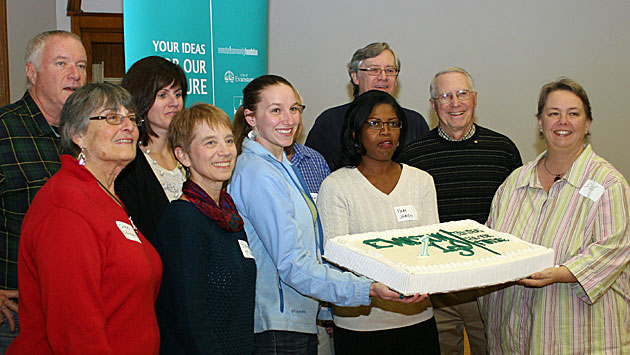 Evanston 150 organizers Thursday night celebrated the one-year-anniversary of the unveiling of their 10 big ideas to mark the city's sesquicentennial with a project update meeting at the Civic Center.

About 50 people marked the occasion with slices of a cake donated by Tag's Bakery on Central Street  and listened to project updates from the team leaders.

The Evanston 150 team with the most success had worked to establish a community health center in Evanston, an idea that already had substantial backing from local officials and was realized this fall, thanks to a federal grant that allowed Erie Family Health Center to open in temporary quarters in the Civic Center last month.

And a group hoping to increase the number of children who can swim celebrated the launch of a pilot program this fall involving some District 65 schools and the local YMCA and YWCA.

Other projects have had greater difficulty finding their footing — including an effort to encourage more environmental activism in town — whose organizers discovered that there already are a lot of groups tilling that turf in Evanston.

The group also learned about plans to celebrate the anniversary year by encouraging groups across the community to plan anniversary events as part of their own program schedules.

Patrick Keenan Devlin, one of the organizers of that project said First Bank and Trust, the Evanston Community Foundation, Mather Lifeways, the McGaw YMCA, Downtown Evanston and Haggerty Consulting have all signed on as sponsors to help pay for advertising to promote those events. 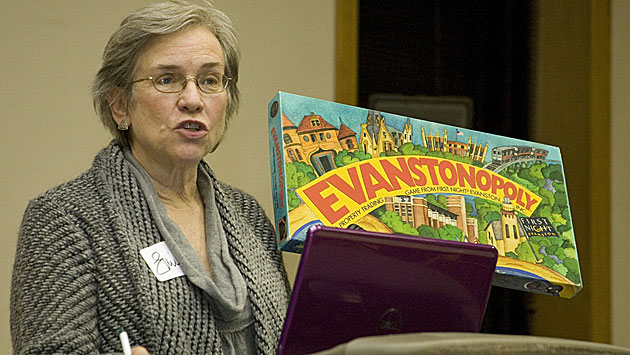 Emily Guthrie with an Evanstonopoly game. (Photo by Karen Kring.)

And Emily Guthrie, who is organizing efforts to revive the First Night Evanston celebration said that group is making progress and hopes to stage a small scale revival of the event early in January 2014.

Guthrie says the group's come up with a variety of fundraising ideas — including selling the 1,000 or so Evanstonopoly games left over from the last First Night Evanston event.