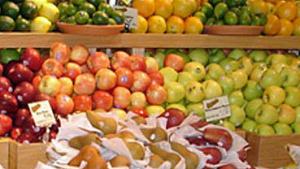 City officials say they're concerned that the Dominick's supermarket in the Evanston Plaza could disappear within the next several years. But would that leave Evanston with a food desert, as one alderman suggested? 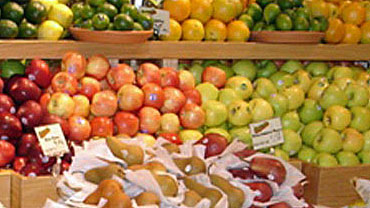 When Evanston aldermen last month approved a tax increment finance district for the Dempster Plaza shopping center, one of the driving forces was concern that the Dominick's supermarket in the plaza might not renew its lease at the end of the decade.

City officials figured they needed a pool of money to help find a different anchor tenant for the plaza if that were to happen.

And that led Alderman Jane Grover, 7th Ward, to speculate that if Dominick's left and wasn't replaced with another food store, Evanston could have a food desert on its west side.

So, what's a food desert? And would Evanston have one if the Dempster-Dodge Dominick's shut down?

Anybody can call anything they want a food desert, of course, but the U.S. Department of Agriculture has tried to come up with a formal definition.

It says that to be a food desert a census tract first has to have at least 20 percent of its residents living in poverty. That's presumably because poor people have less access to cars and thus are less likely to be able to easily travel to food store outside the immediate neighborhood.

Based on the latest census-tract-level data we could find, from the American Community Survey for the period 2005-2009, only one census tract in Evanston meets that standard.

That's tract 8093, in what's sometimes referred to as the student ghetto west of the Northwestern University campus. That tract, bounded by Sherman Avenue, Emerson Street, Green Bay Road, the North Shore channel and Central Street, has a poverty rate of 27.6 percent. 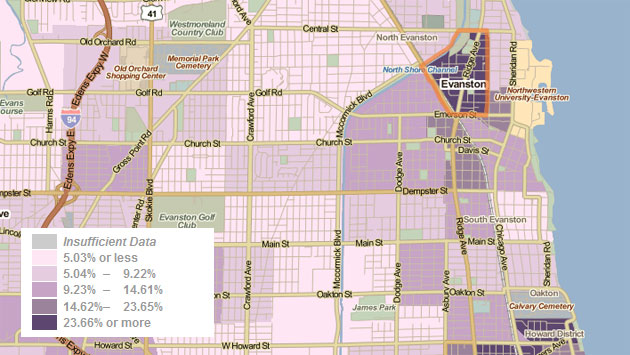 The second part of the USDA definition says, and here we're simplifying a bit, that if more than a third of the people in the low-income census tract live more than a mile from a supermarket or large grocery store, then it's a food desert.

Using that definition, the USDA says there currently are no food deserts in Evanston. That's because residents of the only tract with enough poverty are close enough to either the Dominick's on Green Bay Road or the Whole Foods downtown to have their market needs met.

But as you can see from the map of where food stores are located in Evanston, it would mean a longer trip to the store for many residents living on the west side if Dominick's closed and wasn't replaced..

Evanston has been adding new food stores at a pretty good clip recently — Aldi's in 2010, GFS Marketplace this year and, assuming the schedule holds, Trader Joe's next year.

But all those additions have been in the southwest and east parts of town — areas that already have other stores.

So what should we hope for if the Dominick's space opened up?

Well, the latest dream for foodies, now that Trader Joe's is on the way, seems to be Mariano's, the new chain entering the Chicago area from its base in Milwaukee, with two stores on Chicago's north side, but no suburban location closer than Arlington Heights.