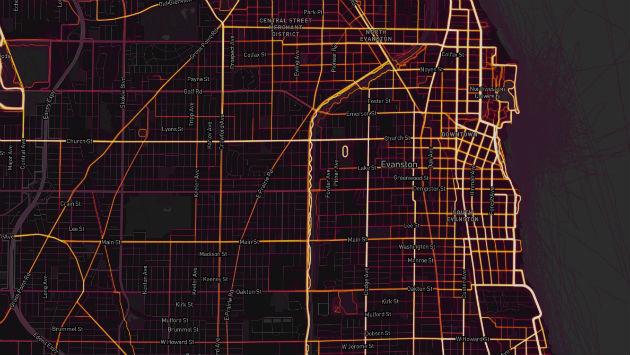 A fitness tracker app makes the eastern reaches of Evanston look like a hotbed of exercise activity compared to neighborhoods further to the west.

It’s been in the news over the past few days after reports that it could be used to identify secret overseas military bases when military personnel used the app to track their own exercise habits.

Various interesting data tidbits you can spot from the map include that the trail on the west bank of the North Shore Channel gets a lot more use than the trail on east bank, that at least a few people manage to cross-country ski on the Canal Shores Golf Course, and that swimmers are most fond of the stretch of waterfront from Dempster to Lee streets.

The map makes it appear that, within the region, only Chicago’s Loop has substantially more avid-exercisers than  the eastern reaches of Evanston.

Of course the data only reflects information from people who use the Strava app, and the map does not appear to have a means to adjust for population density — which means less dense, more auto-oriented suburban areas are unlikely to show up as exercise hotspots.