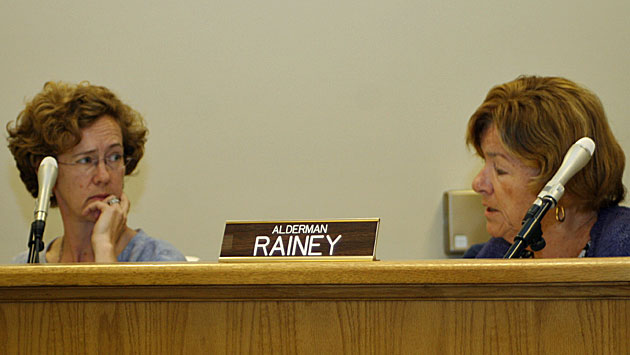 Discussion of a proposed indoor youth sports facility at Evanston's shuttered recycling center got tangled in a debate over ethics at Monday night's City Council meeting.

Alderman Ann Rainey, 8th Ward, objected to Alderman Jane Grover, 7th Ward, speaking on the issue at the Administration and Public Works Committee meeting, because Grover's husband, Bill Blanchard, has been a leader of one of the non-profit groups seeking to lease the facility.

Grover noted that her husband no longer is a leader of the group, the Evanston Baseball Softball Association.

Called upon to offer an opinion, City Attorney Grant Farrar said it would be premature for him comment, and recommended referring the issue to the city's Board of Ethics.

Both Grover and Rainey agreed to do that.

Every vote on the council may count for the future of the sports center plan. It became evident Monday night that a growing number of aldermen have doubts about whether the project makes financial sense for the city.

Last September the council voted 6-2 with Alderman Coleen Burrus, 9th Ward, absent, to direct the city manager to negotiate a lease with the sports groups.

That vote came after the city manager had recommended the building be sold off for commercial development instead — a move he estimated could bring in $1.5 million from the sale and as much as $100,000 a year in property tax revenue.

At that time Rainey voiced strong opposition to the plan and Alderman Delores Holmes, 5th Ward, said she thought the vote was premature.

Monday night Burrus was also sharply critical of the plan, saying it would be a huge cost for the city.

She forecast the city could end up spending hundreds of thousands of dollars on maintaining the building's roof during the projected 25-year term of the lease and that it would incur substantial other costs.

"How can we possibly justify this," Burrus asked, given the city's difficult fiscal situation?

Holmes said she'd never agree to the proposed $1 a year rent from the group for the building and that she believed there were "many other sticking points" with the proposal.

Alderman Peter Braithwaite, 2nd Ward, didn't say where he stood on the project, but asked about the budget for building out the space as a practice facility.

David Campbell, president of the Evanston Baseball Softball Association, said the group has been working with an architect and expects the buildout to cost $500,000 to $700,000 — a cost the sports groups would pay.

Rainey argued that the project should be a for-profit venture that would put the property on the tax rolls, but Campbell said that that would make it cost-prohibitive for lower-income residents.

Burrus responded that the city can't afford to spend so much money on one group, when the project wouldn't cover its costs — noting that the city is in the midst of renegotiating its relationship with various arts groups because earlier agreements left the city with insufficient funds to maintain buildings used for the programs.

Other than Braithwaite and Grover, none of the aldermen who had voted for the project last fall spoke on the issue Monday night. Alderman Mark Tendam, 6th Ward, was absent from the meeting.

City Manager Wally Bobkiewicz said he was looking for more direction for the council about its goals for the project as he continues discussions about the lease with the sports groups, but the council didn't actually take a vote on the issue.

Top: Alderman Grover watches as Alderman Rainey explains why she thinks Grover should recuse herself from the sports center debate.