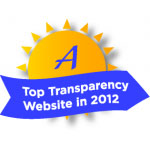 SPRINGFIELD — Usually when Illinois gets ranked in a list that compares states, it's about ailing pension systems or the number of governors sent to jail. But that wasn't the case today.

SPRINGFIELD — Usually when Illinois gets ranked in a list that compares states, it's about ailing pension systems or the number of governors sent to jail. But that wasn't the case today.

The Sunshine Review, a nonprofit organization dedicated to state and local government transparency, on Thursday awarded Illinois with 19 Sunny Awards for websites that provide windows into government activity. Illinois had the third most 2012 Sunny Awards, trailing only Florida and Texas.

Kristin McMurray, managing editor for the Sunshine Review, said the state did so well because of several cities and counties in the state that provide online data such as budgets, audits and vendor contracts.

"I've been very impressed by it and a little surprised. Illinois has a reputation," McMurray said.

McMurray said her organization started the awards as a way to reward states that provide people with information online, and push those that don't.

Evanston City Manager Wally Bobkiewicz told Evanston Now the city has focused quite a bit on making sure information on the city's website, which earned the group's top "A+" rating, is as complete and thorough as it can be.

"We look to other jurisdictions and compare ourselves with what other similar communities — like Santa Monica, Calif.; Cambridge, Mass.; Austin, Texas, or Madison, Wis. are doing and try to be at least as comprehensive as those peer cities," he added.

But it takes more than a good website to be transparent, Bobkiewicz added. "We have the 311 phone service for people who may not be familiar with using the internet, and we have ward meetings," noting that staff tonight will be attending the seventh scheduled meeting about referendum issues on this month's election ballot.

McHenry County in northern Illinois was one of the state's winners. This was the second Sunny Award in as many years for the county.

"It's very consistent with the direction the board has tried to take the county" in terms of open government, McHenry County Administrator Peter Austin said.

Josh Sharp is the director of government relations for the Illinois Press Association, which lobbies for the news industry in the state as well as open government. Sharp said anytime a governmental body is more transparent is good, but he said he isn't satisfied with their overall openness efforts.

"They've got great websites, but the culture of secrecy in … much of Illinois still looms very large. They've still got a long way, to go," Sharp said.