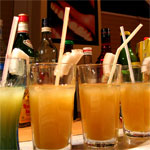 Evanston aldermen approved liquor licenses for two new restaurants Tuesday night — one on Howard Street, the other on Main Street.

The aldermen issued the city's first "Class S" liquor license to Ward Eight, which plans to open in a city-owned building at 629 Howard St. once the owners also receive a liquor license from the state.

Alderman Ann Rainey, 8th Ward, got the aldermen to agree to give the approval immediate effect, rather than wait the usual two weeks for a second vote, after saying that the timeline to get a state license can range from one to three months and the state license can't be applied for until after the city license is issued.

The aldermen also gave final approval to a "Class C" liquor license — the 29th in the city — for NSB Ventures LLC, doing business as The Alcove, at 512 Main St.

Alcove owner Scott Bradley says he plans to serve sandwiches cooked on a panini grill press, side dishes and salads as well as serving wine, beer and cocktails in what he describes as a European-styled neighborhood restaurant.