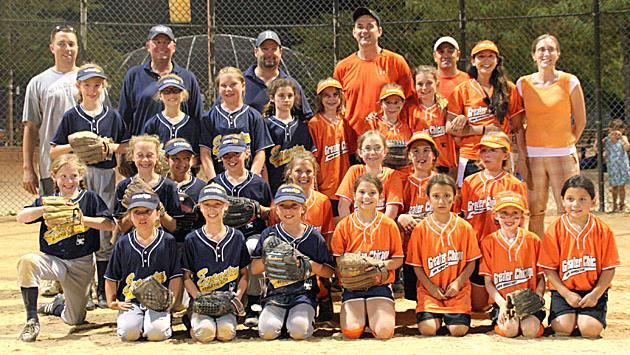 After a storm passed through and lightning cleared from the area it was time to play softball under the lights at Evanston's James Park.

Two teams faced off for the Championship of the division made up of 3rd and 4th graders. Girls from St. Athanasius School, The A's, on a team sponsored by Evanston Athletic Club hosted a team of Orrington girls, The Tigers, sponsored by Greater Chicago Food Depository.

Both teams represent the Evanston Baseball and Softball Association.

The pre-game was filled with "big league" style fun! Music played during warmups, players were introduced for both teams, and the National Anthem was played. Then it was time to "play ball"

The Tigers hit first and their leadoff batter Natalie Ward roped a line drive to right field that was caught by Emma Powell, that set the tone for the inning and the A's held. In the bottom of the first, with one out, the A's caught fire. Eleanor Ward ripped a single, then scored on Ellie Peterson's long single to right.

Peterson then scored on a triple by Bella des Roberts. Zoe Canafax doubled, scoring des Roberts. Then a single by Gabi Durkin moved Canafax to third who then scored on Maddie Ritchey's RBI. Kate Hjorth knocked in the final run of the inning and the EAC A's were up 5-0.

Both teams held in the second inning on solid pitching and defense.

In the bottom of the third, The A's had the top of their order up again. Sydney Harrison got on with a bunt, moved to third on Eleanor Ward's single, then scored on Ellie Peterson's hit. Des Robert and Canafax both singled.

Stefi Durkin was hit by a pitch, and that loaded it up for Kate Hjorth, who singled in the fourth run of the inning. The Tigers made some outstanding plays in the inning to hold them at 4. The score after three was 9 – 0 A's .

In the top of the fourth, Callista O'Connor started the inning off with a single and later scored along with Natalie Ward on a three-run home run hit by Hannah Lipman. Katrina O'Connor and Issy Weber both scored in the same inning as The Tigers scored all five of their runs in the fourth inning closing the gap 9-5.

Facing a tough pitcher in Callista O'Connor in the fourth, the A's managed to get one run on Singles by Emma Powell and Avery Peterson, increasing their lead to 10 – 5. That closed out the scoring for both teams.

The Tiger's O'Connor, battling the flu, held EAC scoreless in the fifth; Eleanor Ward pitched well for the EAC A's in the bottome of the fifth inning, and Zoe Canafax closed it out in the sixth securing the 10 – 5 victory.