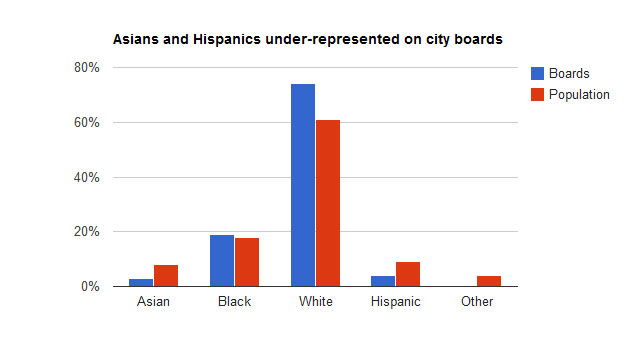 A new survey of the members of the appointed boards and committees of Evanston city government shows that Asians and Hispanics are under-represented on the panels, compared to their proportion of the city's populaion.

The study conducted by city staff and released this week by Mayor Elizabeth Tisdahl, shows that Asians hold just 3 percent of the seats on city boards, commissions and committees, while composing, according to the 2010 U.S. Census, 8 percent of the city's population.

Whites, and, to a lesser extent, blacks, were over-represented on the panels.

The census reports about 4 percent of Evanstonians of being of some other racial grouping — mostly those who say they are of more than one race. The city data didn't include a category for those residents.

The study looked at 26 city panels that have appointed members and excluded committees that are composed exclusively of the elected aldermen. But an additional 18 groups weren't included in the report. There was no immediate explanation for that discrepancy.

The study also showed that women are slightly over-represented on the panels — holding 55 percent of the appointments, while composing 52 percent of the city's population.

It did not offer any historical comparisons to show trends in board composition over time.

Mayor Tisdahl, in a memo to aldermen, urdged them to "continue to encourage everyone to apply for a spot on a board or commission, particularly Latinos and Asians."