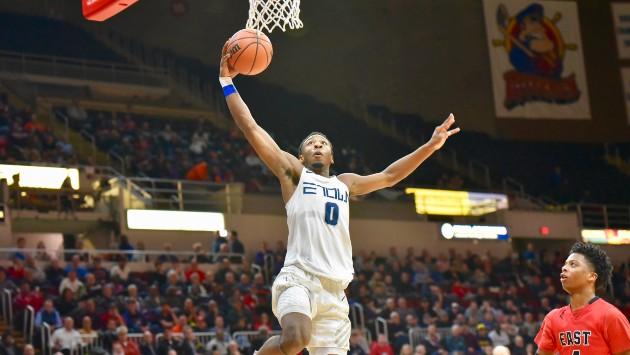 The championship basketball culture built by Mike Ellis and his coaching staff at Evanston began on the defensive side of the ball.

That’s where the Wildkits will have to establish their identity as a team at the start of the 2019-20 season this week.

In-your-face defense, where no pass is left unchallenged and no shot is uncontested, helped the Wildkits earn back-to-back Final Four appearances for the first time in program history, including last year’s state runnerup finish in Class 4A with a school record 32 victories.

Two starters — Division I prospects Jaylin Gibson and Blake Peters — are back, in new roles as juniors, and new faces in other places mean it might take time for the Wildkits to regain that defensive swagger.

Evanston opens play Tuesday at the St. Viator Thanksgiving Tournament, a round-robin affair where they’re the defending champions. Games Tuesday against Libertyville (7 p.m.), Wednesday against Conant (5:30 p.m.), Friday against Prospect (5 p.m,) and Saturday versus host St. Viator (3 p.m.) will give Ellis an early indication of whether or not his team is pointed in the right direction on D.

“I think our offense will be just as efficient as it was last year, because we have a lot of guys with similar skill sets who can dribble, pass and shoot,” Ellis said. “The question is, can we stop other teams from scoring — and can we rebound? That’s the point of emphasis for us, because that’s what wins and loses basketball games.

“Right now we’re still trying to figure out who our top 7-8-9 guys are. A lot of what we’re doing is new for so many guys (including 4 transfers in), and whoever will help us play better as a unit will have the inside track.”

Gibson and Peters will likely be joined by juniors Isaiah (Itchy) Holden and Elijah Bull, who transferred back to ETHS after spending one season at Niles North, in the starting lineup for Tuesday’s season debut. Six-foot-seven junior Logan Talmage handled the post duties for much of the summer, although Ellis has used a five-guard approach with success on occasion in the past.

Gibson, at 6-foot-4, will move to point guard this year, a position he embraced growing up before he hit a growth spurt. He averaged 7.9 points per game as a sophomore and ranked third on the team in assists with 80.

Now the ball will be in his hands to guide the Evanston attack and he’ll have to provide leadership on a team featuring only 3 seniors on the roster.

“Nothing is in the same spot on the chessboard as it was last year,” Ellis pointed out. “With all these new pieces, Jaylin and Blake will have to help the other guys along. Being a leader is way more challenging for them now. Every year is a fresh start and it’s a new (team) dynamic.

“Jaylin has worked hard on some of his weaknesses, to the point where now they’re strengths in his game. He’s cut down on some of the carelessness handling the ball and passing. He’s always had great court vision, and now he’s starting to time up his reads and make better decisions. We also want him to stay aggressive and look to score, too

“He also spent a lot of time working to improve his outside shot — and he has.”

The 6-foot-1 Peters already owns the Evanston 3-point shooting records for a single season (114) and career (193) after his first two varsity seasons and is on pace to threaten the all-time Illinois High School Association state record of 464 by Matt Roth of downstate Washington from 2004-2008.

He scored a career-high 30 points last year against Maine South, averaging 14.3 on the season, and actually shot 3-pointers better from the field (52 percent) than overall (48 percent) against Central Suburban League South division foes who knew in advance that their defenses always had to account for the sharpshooter.

Getting Peters more open looks is the challenge now that standout guards Lance Jones, Jaheim Holden and Ryan Bost have graduated and aren’t there to deliver passes to him, especially in transition.

“We’ll get results if we get Blake some shots,” Ellis agreed. “At the end of 32 minutes, even though we want to be balanced as a team, we want the ball to have been in his hands a lot. He’s worked hard on becoming more of an all-around player, on getting to the basket off the dribble, and he’s expanded his game to beyond being a catch-and-shoot player.

“He knows just where he’s efficient (offensively) and he can get to his spots. He’ll also have some tougher assignments now on the defensive end, and this year we’re counting on him to be one of our best players at both ends of the floor.”

Ellis is hoping either Bull, who played major varsity minutes as a freshman at ETHS, or Holden will emerge as a defensive stopper in time to contribute against another loaded schedule this winter.

“Right now Elijah is still trying to establish himself as one of our main pieces,” said Ellis. “He’s a talented and bright young man, one of those players who is unselfish and isn’t looking to put a lot of points of his own on the board. He’s a guy who will lead by example, like Ryan Bost did for us last year, and I know he takes a lot of pride in his defensive performance.

“Itchy at times in practice looks like he can be a difference maker for us. We need him to play more aggressive, on offense and on defense. He can play a huge role for us. A lot of times, when we look our best as a team, that’s when he’s playing HIS best. He can be a tone-setter for us — and you can’t have too many of those.”

Evanston’s rigorous schedule includes shootout appearances against power teams like Notre Dame (Dec. 6 at the Chicago Elite Classic), Chicago Orr (Dec. 15 at the Team Rose Shootout), Hillcrest (Jan. 18 at War on the Shore at New Trier), and No. 1 ranked Bloom (Jan. 25 at When Sides Collide at Glenbard East) along with February matchups versus Oak Park-River Forest and Milwaukee Hamilton.

The Wildkits are also the defending Central Suburban League South division champions and will open conference play at home on Dec. 5 against Glenbrook North, which is moving over from the CSL North.

“How will they handle adversity when they’re up against it? If we’re not winning those games, what lessons are we taking away from them? We’re either going to win or we’re going to learn what it takes to be successful. Hopefully, we can do both.”