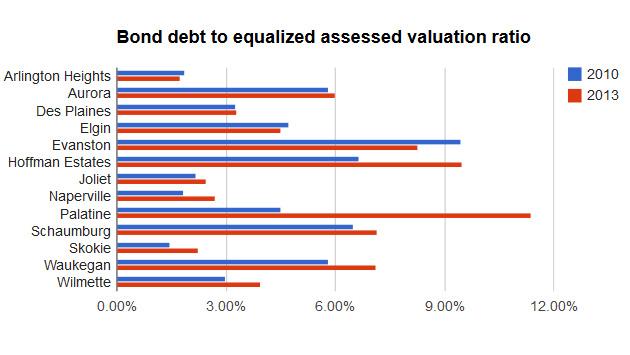 Evanston aldermen will get good news and bad news at a special strategic planning meeting tonight.

The good news is that the city has managed to cut its total bond debt at a time when debt in many other towns has been rising.

The bad news is that Evanston's debt level is still unusually high — and the city has capital funding needs that will push the debt level back up unless major changes are made to current spending plans.

Total bond indebtedness for Evanston, city officials say, has fallen from $278 million in 2010 to $226 million this year — or 19 percent

Looking at Evanston and a dozen other Chicago area municipalities that city officials used for comparison — the average change was a debt increase of 5.6 percent.

Debt levels are often compared to a city's property tax base — the equalized assessed valuation, or EAV, of property that can be taxed to pay off the debt.

From 2010 to 2013 Evanston's EAV fell 7 percent — but that was less than the average 12 percent drop in the communities studied — indicating the recession's impact on values was less severe here.

So Evanston's ratio of debt to tax base (shown in the chart above) fell from 9.47 percent to 8.25 percent — while the average for the towns studied increased from 4.16 percent to 4.99 percent. But that leaves Evanston's debt ratio 65 percent higher than the average.

The analysis includes general obligation debt and debt with a special revenue stream designated to pay it off — such as utility or parking fees. It does not include unfunded pension debt — which for many communities, including Evanston, represents another huge liability.

Assistant City Manager Marty Lyons, in a memo to aldermen, says the city's capital debt "is being eclipsed by police and firefighter pension fund debt" over which the city has limited control because benefit levels are set by the state.

The city achieved much of its reduction in capital debt by spending down reserves during the recession. But that, Lyons says, "will not be a long-term solution, as most funds are near or below optimal levels."

He says the proposed capital improvement plan calls for issuance of new general obligation bonds totalling $48.3 million over the next four years.

That, he says, would mean adding $2 million to $4 million more in property-tax-supported debt each year than will be reitired.

And, he says, as the city revises its capital plan to include all facilities, the total projected costs will increase — further widening the gap between bonds retired and new debt issued.

Lyons will discuss with aldermen several strategies for solving the problem — ranging from reducing the number of facilities the city has to maintain to increasing taxes or user fees.

We'll report on how aldermen react to those ideas after tonight's meeting, which is scheduled for 6:15 p.m. at the Civic Center.