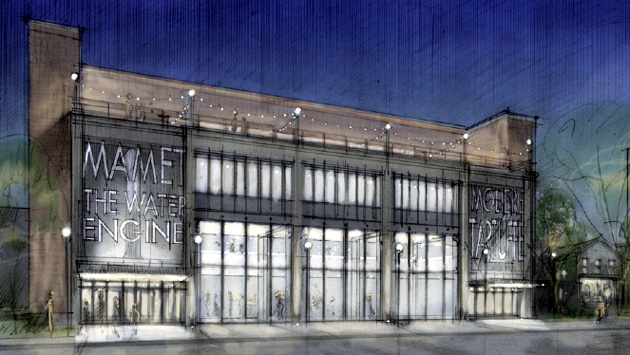 A conceptual rendering of one of the theaters that are proposed as part of the downtown arts study that was presented to City Council this evening.

A packet with information on tonight's agend items is available online.

Mayor Tisdahl says Harry Belafonte, in town for a speech at Northwestern University, told her he liked eating at the new Chicken and Waffles restaurant on Dempster Street.

City Clerk reminds candidates that they now can post campaign signs — as long as they don't put them on the public parkway.

Paul Selden,  of Connections for the Homeless, opposes the NSP2 amendment because it reduces the amount of housing provided for extremely low income residents.

John Szostek, of Piccolo Theatre, favors the Chicago-Main TIF. Says new money will attract more capital to the district. Says he likes the way our future looks with the TIF proposal.

John O'Donnell, developer of proposed Chicago-Main office building, says the strong transit access at the location will make it easy for both young people living on the north side of Chicago and executives living on the north shore to easily get to offices in the area.

Says he's committed to provideing a state of the art office building. Will be the only place in Evanston that will have the strong technology features.

Steve Rogan, owner of Varsity, says never was contacted for plans for the theater by the consultant working on the city's downtown arts study.

Hugh Bartling, a member of the Environment Board, says he's concerned about turning Emerson into a four-lane road from Ridge to Sherman as part of the Emerson high-rise project. Says that area has been designated by the city as a bike route. Concerned that turning it into a four-lane road will increase safety hazards for pedestrians and bicyclists.

Steve Ross of AMLI says the development on Chicago Avenue will open in April. Says it's a completely smoke-free community. Says AMLI supports the Chicago-Main TIF district. Says more jobs and economic development in the area will help created demand for apartments at AMLI. Also like the transit improvements and super-high speed internet access.

Presentation by several consultants who worked on the project.

Says there's a great need for mid-size spaces. Have successful venues in smaller spaces, but need room to grow.

A copy of the performing arts study is available online.

A chart from the study showing the proposed uses of the three different venues.

Locations of three possible sites identified by the consultants for the three different recommended venues.

Alderman Judy Fiske, 1st Ward, asks whether talked to property owners about interest in the project.

Dennis Marino of city staff says visited some sites and worked through brokers to identify some sites. But didn't talk to all the property owners involved.

Alderman Jane Grover, 7th Ward, asks what typically municipalities have done to bring about this kind of a project.

Consultant says in some cases cities work with developers or broader projects to have them participate in a "percentage for arts" model. Says there "are many ways to get at it."

Consultants say they're not sure about that.

Consultants say don't want to speak for Northlight, but believe they want to return to their roots here.

City Manager Wally Bobkiewicz, reading from a website report on the Skokie performing arts center says it was built in the 1980s for $18 million, with $4 million from the state and most of the rest from the state.

Mayor Elizabeth Tisdahl says report seemed great — but then got very hazy about the funding. Asks for more detail.

Consultant says Evanston is high on the list of communities that support philanthropic enterprises, has the university here. Says public private partnerships that allow cities and municipalities to be involved, but not take the financial burden — potential for that is there — but relies a lot on having the interest in the community.

Consultant says city needs to have a continuing role in organizing and promoting the project.

Alderman Grover, 7th Ward, says its important to not shelve the study and move forward in connection with the EvansArts study that's to be delivered soon.

City manager says this is the first of a series of reports and discussions about theater arts. Says next week have update at Human Services on the Piven Theatre plans.

Says Hadley Clarke Mansion probably be coming back before the City Council in between 45 and 60 days.

Says the EvansArts report will be available in mid-March.

Says should be able to have a more complete discussion of next steps after that.

Rainey moves to accept the report.

We'll note any items taken off the consent agenda as it's read.

Vote is to introduce, but then send it back to committee for amendments. Approved unanimously.

City manager says the resolution is new. To provide a roadmap for how TIF funds would be used.

Says the resolution calls for the creation of an advisory committee of local merchants and residents to review TIF plans over the district's life.

Says redevelopment plan for Main-Chicago would be limited to use for office and retail — not residential.

Says includes provisions to not spend money for infrastructure improvements unless the private projects to generate the tax revenue to fund it goes forward.

Says CTA has indicated interest in being partner in the project, as have Metra and Union Pacific.

Says this TIF is an investment in the changing priorities of the community.

Says a variety of elements are coming together to make this possible. Calls it "the future of Evanston."

Alderman Coleen Burrus says she's opposed to the TIF. Says it's not a blighted area (as called for in the TIF statutes). Says there are no more infrastructure issues here than in other parts of the community.

She says it's really all about the office building. And Kellogg report indicated there wasn't much need.

Says it there was great demand for office space the developer would have been able to get private funding for it.

Criticizes the concept in an earlier TIF plan for a $19.5 million elevated bike path.

Says she'll be voting no

Alderman Melissa Wynne, 3rd Ward, says this is a transformational moment for Evanston. All the other TIFs in the city that are well underway have been a major success for the city.

Cites the renaissance of downtown with the theater project.

Main and Chicago has an empty corner and two major transportation lines, she says, as well as 20,000 cars going north-south and 10,000 going east-west.

Says the project will be an enormous success.

Burrus says no developer is willing to put their money into the project — they're only asking us to put our money into it.

Wynne says the only other proposals for developing the corner included a drug store with a drive thru — that traffic staff concluded that wouldn't be safe.

Burrus says she can't understand why an office building with parking would be safe, but a drive thru would not be.

Three ordinances required for the TIF also are approved 7-2 with Wilson and Burrus voting no.

Rainey says this is the least exciting of all the TIFs that she's voted on. Whatever is good for Main-Chicago is just as good for Howard Street. Objects to Wynne's vote against the theater project on Howard Street.

The high-rise projects on Emerson Street.

Alderman Judy Fiske, 1st Ward, says she'll vote against the project. Says she would have preferred a project that included plans to convert them to condos later. Says she's worried that may be on the cusp of overbuilding rental units in town.

Says also concerned about risks to pedestrians and cyclists by changing Emerson to a four-lane road.

Suzette Robinson, public works director, says anticipate 1500 additional trips per day, the road needs the addition of the four-lanes, and removal of parking from the south side of the street.

Says there are no bike lanes on that stretch of Emerson now. — bikes have to share the road with cars.

Says the developer will be spending $800K on streetscape improvements.

Alderman Don Wilson, 4th Ward, says he's interested in seeing whether the street can be left at two lanes — because he bicycles on that section of Emerson.

Alderman Delores Holmes, 5th Ward, says need to at least remove parking on the south side of Emerson to make it possible for drivers coming out of Oak to safely enter Emerson.

Mayor Elizabeth Tisdahl says NU people tell her that we need "wet labs" — which is important for keeping NU related businesses in town.

Rainey says untl NU is willing to pay taxes on its downtown office buildings, shouldn't pay attention to that. "Tell them this is a $100 million project that helps pay for what they're not paying for," Rainey says.

Alderman Peter Braithwaite, 2nd Ward, says the new development will bring in $1 million in tax revenue. Says unfair to tell developer who's not asking for any subsidy from the city how he should develop his property.

Wynne and Fiske vote no.

Wilson and Rainey and Fiske — Note passing of Vito Brugliera.

Braithwaite — Wednesday 7p 2424 Dempster …meeting regarding parking strategy and house of operation for the restaurant.