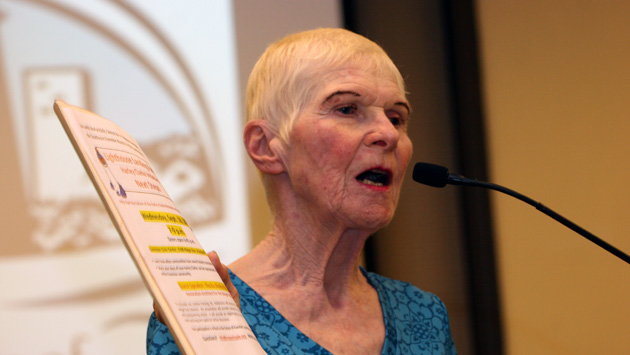 The meeting is scheduled to begin about 8:10 p.m.

Assistant City Manager Marty Lyons discusses upcoming budget planning meetings … at Chandler-Newberger Center next Wednesday … and various other sessions … including on Facebook. Calendar for some of the events.

Suggests shutting down the fire station closest to the university to pressure the school to provide more support for the city.

Barbara Janes, from No Park Sale, invites people to meeting at Parasol Room at Civic Center on Wednesday, Sept. 18. Says Harley Clarke mansion is a beautiful asset that should be preserved for the community.

Says city has 190-lane-miles of streets. Plans to present a four-year plan for updating streets next spring.

Provides details for percentage of local streets in each ward and what share of those have been resurfaced in recent years. (Fairly substantial variation from one ward to another.)

Says considers primary routes to be "city-wide" regardless of what ward they happen to be in.

Says in a couple of years the unfunded liability will go on the city's balance sheet because of accounting changes.

Alderman Ann Rainey, 8th Ward, asks why the rating agencies or the government accounting board can't get on the same page.

Art Tepfer, the city's pension actuary, says real problem is the difference between accountants and actuaries

The Government Accounting Standards Board, he says, has finally decided that the funding of penison plans should be differentiatied from the financing of the plans.

The current group, by contrast, believes that pension plans should be considered as a profit center — a marketable asset — thinks pensions should be treated as getting a 4 percent rate of returns.

Says in the future 6.75 won't be considered an acceptable rate — will be something lower, but not the 4 percent that Moody's is looking at.

Says the new rates will apply to all pension funds.

Alderman Jane Grover, 7th Ward,  asks do get credit for setting aside more?

Lyons says rating agencies had nice things to say — but still downgraded us. If had done nothing more likely would have had rating cut more.

Tepfer says need roughly 11 to 12 percent return just to pay the pensions now — so pension contributions have to keep going up it's tough thing to do.

Says last year did really well on gain-loss analysis — but that only counts for the year.

Alderman Don Wilson, 4th Ward, says he appreciates the change in the assumed rate of return. Says in some ways wishes it was a little closer to what Moody's is looking for.

Personally he says, he doesn't want to go below what put in last time — even though it's a little more than what's recommended by the actuarial report.

Mayor Elizabeth Tisdahl says she agrees with Wilson and says city manager is looking for a straw vote on it.

Rainey says she favors going with the recommendation on the consultant — because of the burden spending any more imposes on the taxpayers. Says tax bills are skyrocketing out of control. Every penny we add to their burden is a gigantic burden.

Tendam agrees with Wilson. Doesn't wnat to go backwards, maybe even somewhat more to make an honest attempt to bring down the unfunded pension amount.

Holmes favors recommendation made by staff. Says has many residents who are struggling with taxes.

Wynne agrees with Holmes and Rainey.

We'll note any items taken off the consent agenda.

Rainey says aldermen still have a lot of questions about the proposal for liquor code rewrite.

Holmes notes the Safe School zone proposal is recommended by staff to be postponed until the City Council's Sept. 23 meeting. City-School Liaison Committee meeting will be at 7 p.m. tomorrow in the Council Chamber, says Alderman Tendam. Item held.

Fiske .. .thanks to city staff for meeting the challenges on Davis Street construction and thanks downtown residents for their patience.

Wynne .. .thanks staff for helping bring Trader Joe's to Evanston … and for ETHS Booster event at Sherman Plaza parking garage.

Wilson says Davis Street will be awesome when it's done…but are a lot of challenges along the way.

Rainey … Thursday, Howard-Hartrey TIF joint review board meeting. Notes that on Sept. 16th 9:30 a.m. trial for the Costulas murder will begin in Skokie district court. Been two years since the murder.