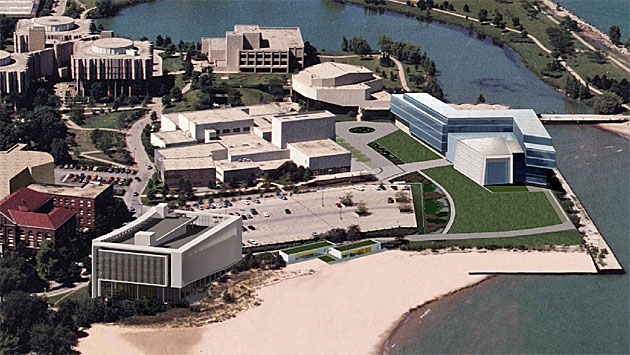 Here's a recap of our live coverage of tonight's Evanston City Council meeting. The aldermen voted to grant Northwestern University's appeal of the Preservation Commission's denial of a certificate of appropriateness for its proposed new visitors center.

Evanston gets Bike Friendly Community Award from League of American Bicyclists. Evanston, Chicago, Naperville, Champaign-Urbana and Schaumberg are only communities in Illninois to receive the award.

Live web chat and click-to-call and SMS/Text service have been added.

Daniel Garrison, 1228 Simpson St., retired NU faculty member, objects to proposed visitor center. Says it would be next to Fisk Hall, the only university building designed by Daniel Burnham. Says the new visitor center would not be compatible with Fisk.

Paul Janicki, of Preservation League of Evanston, says the new building needs to be visually related to Fisk Hall and the current design isn't. Says council should defer to the Preservation Commission's decision.

Jeanne Lindwall, 625 Library Place, says NU should provide the fire lane access for the visitor center on its own property. not on city park land. Fears the big window areas of the visitor center will be used as giant billboards.

Jack Weiss, Preservation Commission member and president of Design Evanston, says the visitor center doesn't meet ordinance standards. Says building would present a massive visual statement in its present location. Suggests putting it on the existing parking deck instead. Says it would be compatible there.

Other speakers also object to the visitor center proposal.

Steve Griffin, director of community and economic development, says the law is very strict. It's for the council to review the record as prepared by the Preservation Commission.

Carlos Ruiz, preservation planner, does presentation outlining the proposal and the issue. Material from his presentation, including the visuals, are included in the council packet.

Says latest measurements say Fisk Hall height is 73-feet-1-inch. Visitor center is 70-feet-6-inches to top of roof and 81-feet-8-inches to the top of the building facia.

Assistant City Attorney Ken Cox says the ordinance provides for the City Council to review the proposal "on basis of the record and the standards."

Ron Nayler, associate vice president for facility management from Northwestern, says the proposal meets all city zoning standards, and that it involves no filling of the lakefront.

Says has worked with the city to maintain public access through the university campus. Says design of path was revised to meet fire department requirement for fire lane.

Says the review should be for 158-acre lot of record — not just the building next door. Says campus has very diverse and eclectic architecture developed over time.

Says tallest building on lot of record — University Hall is 112 feet tall. Says visitor center is well withing the heights on the lot of record. McCormick Tribune Center is within 40 some feet of Fisk Hall and is over 80 feet tall.

Alderman Judy Fiske, 1st Ward, asks about changes to shoreline. Nayler says no plan for changes. Says have to do dredging periodically to keep flow from the cooling pond open.

Nayler says no plans to remove dunes along the shoreline that create bird habitat.

Fiske says extremely impressed with time NU and the commission gave to the issue. Said commission makes great effort to find a mutually acceptable plan. Says if the building were just pushed back to the north would be a "win-win" for everybody.

Says concerned about NU proposal to push parking to the edge of campus. Says would leave landmark buildings "ringed" with parking.

Fiske says representative of Chicago Audubon Society told her the plan would be devastating for migrating birds and wildlife.

Says fire lane would remove prescious shoreline from the city.

Says wants the university to have what it needs — but on the campus.

Nayler says have bird-friendly glass as result of meeting with Audubon.

Says can't move the building north because the current parking deck is there. Have moved it as far north as possible already, overlapping the deck with a canteliever. Otherwise would be losing too much parking.

Fiske says its just such a sensitive area, if took the time to reconsider, everyone would appreciate it very much.

Nayler says not all parking would be right on Sheridan. Says recent north campus garage proposal is proposed for the interior of the campus, away from Sheridan Road.

Says eventually plan also calls for underground parking at the center of the campus.

Says it will probably be 15 years before that underground parking is built.

Says removal of parking for the music school development removes about 325 parking spaces, and the new visitor center will add about 435 spaces — so its a net gain of only about 110 spaces.

Grover moves to approve the university's appeal of the Preservation Commission's denial. Gets a second,

Asks whether can consider the entire landmark lot of record? Ruiz says commission concluded that could only look at what could see from public right of way — which primarily would be Fisk Hall.

Grover says need to consider everything that's part of the campus — which is the true context of what the building fits into.

Grover says the glass sheathing on the outisde of the bilding as a hazard to migratory birds has been accommodated — makes it much more bird friendly than many other buildings along the lakefront.

Says plan has also met the goal of maintaining access to the lakefront bike path.

Alderman Don Wilson, 4th Ward, says lot of people claim this was "sprung" on them recently — but its actually been public since February.

Wilson says the campus has very different-looking buildings. Says has looked at aerial views of the campus over time. Says Fisk used to be right on the lake, it's now separated from the lake by the landfill.

Says the building is a visitor center — its supposed to make a visual impact.

Says he walks and bikes throuogh the area now — says its the nastiest part of the stretch now. Says new plans will be an improvement.

Wilson says can't make everybody happy with a project like this. Says gets complaints that NU fills up the parking — this will help address that.

Alderman Melissa Wynne, 3rd Ward, says can appreciate the university's need for a visitor center. Thinks this building does that. Says it will make for a much safer Sheridan Road. But …

Says there's been enormous amount of misinformation in the community about the project.

Says worked on lakefront master plan — critical issue was maintaining the dunescape for migratory birds and maintaining a "dark sky." Says that concerns her about the parking garage.

Wynne says she can't support the motion to move forward with the project tonight.

Says she'd like to see the proposal tabled, if not, will vote no.

Says would like to see the university to add dunescape planting, like the one at Clark Street Beach, along the fire lane.

Fiske and Wynne vote no. Burrus recuses herself from voting, because she's a university employee.

Public Works Director Suzette Robinson makes a presentation on the program. Says more than 95 percent of residents choose to participate in the 50-50 sidewalk replacement program.

Says city spends about $9K a year on asphalt for temporary sidewalk repairs. Concedes that the cold-patch used is unsightly. But all the other options are more expensive. And the cold-patch approach does tend to encourage people to participate in the 50-50 replacement program.

Burrus says the cold patch is embarrassingly bad looking. Wonders whether residents would be willing to pay part of the cost of the more expensive repairs — short of full replacement.

Rainey says it seems the broken sidewalks are safer than the cold patch. Wants policy to do away with the current form of repair. Says can budget in the other approaches.

Wynne says the skimcoat appears to be asking for more trouble. Doesn't last very long and looks awful when it's deteriorating.

Mudjacking, she says, in some instances would be a great alternative.

Tendam asks how long the other alternative solutions would last and what they would cost.

Robinson says the best alternative is replacement, but the replacement program is voluntary. Once have notice of problem, city has legal liability issue and has to act — so cold patch is the easiest solution.

Rainey asks for a draft version of a mandatory program.

City Manager says will have a report back on the proposal by the Saturday, Nov. 10, budget workshop.

Fire Chief Greg Klaiber says recent legislation by state mandates hiring practices for firefighters — the test istelf, the structure of the test, and that candidates must be interviewed based on the results of the test.

New commission, Klaiber says, will have seven members and will have a lot more candidates to interview, especially on the fire side.

Interview panels will consist of five people — two civil service commissioners, one person from human resources plus two people from the service doing the hiring — either police or fire.

WineGoddess liquor license. Rainey says no urgency in approving. Says some of the documentation isn't complete. Other material arrived only this evening. Says need to be more consistent. Motion to suspend the rules fails because Fiske votes against it.

JT's Bar and Grill liquor license. Bobkiewicz says staff is trying to accommodate business and let them start selling liquor as soon as can. Rainey says if going to do it need to do it right. Having paperwork scattered all over, not acceptable. Bobkiewicz says its it's in the proper file, in the liquor office. Suspension of rules approved. Final approval granted.

Fire lane for NU visitor center. FIske asks for revision of fire lane … to run through the building. And wants more information about the least agrement — and increase of the payment. Wynne wants plan to have university develop a dunescape on the city's property. Approved for introduction 8-0.

Chase Bank branch Crawford and Gross Point…removing prohibition on a drive-thru. Tendam says the project has been in the works more than a year. Says it's critical to get a decision on whether heciy is willing to allow a drive thru on the site.

Tendam says there's huge support for the project in the ward. Says the supporters tend not to show up. Says Chase has gone from a three-lot proposal to a one-lot proposal, which is what the objectors said they wanted.

Says plan now goes back to ZBA and will have many more public meetings.

Fiske says she's reluctant to change the zoning ordinance for one particular parcel.

Rainey — Meeting for landlords on licenisng ordinance at the police outpost on Oct. 30.