Here's a recap of our live coverage of tonight's Evanston City Council meeting..

City consultant says all notice requirements under state law for creating the TIF have been complied with.

City planner Johanna Nyden says all the other taxing bodies affected by the TIF have indicated support for it.

Says the TIF will encourage transit-oriented development, with both CTA and Metra stations there. 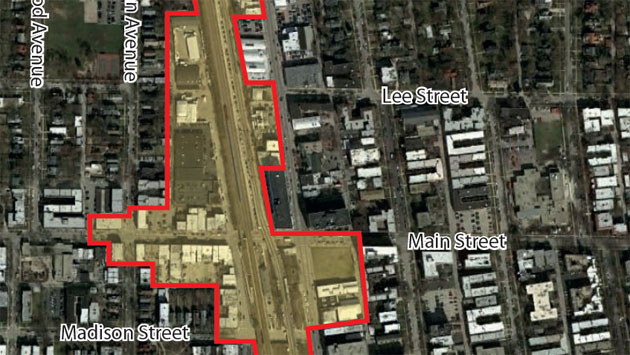 Map shows the proposed TIF boundaries outlined in red. The TIF district would also include railroad right of way to the north and south of what's shown on the map.

No action on the TIF proposal tonight — just a public hearing on the proposal.

Shawn Chinsky, 714 Main, of Good's picture framing, says he has some concerns about the TIF plan. Says plan calls his block blighted. Says staff says the city isn't planning to acquire property on the block — but he's not very confident about that. Says is uncomfortable about the lack of detail in the proposal.

Doesn't think should be using tax dollars from TIF to support commercial businesses.

Alan Price, owns property in the 700 block of Main. Says commends city for finally paying attention to his area. Says TIF proposals recognizes the neighborhood's assets. Anything to enhance the economic climate would be appreciated. But not convinced the TIF will do that.

Fears that higher taxes will put a squeeze on property owners.

Asks what buildings have been targeted for redevelopment.

Suggests creation of an SSA — a special service area — as a more efficient way to achieve development goals than the TIF.

John Szostek, of Piccolo Theatre, says he favors the TIF proposal. Says it will help stimulate further development in the area. Says the proposed office-retail development at Main and Chicago would be a big new asset.

Says TIF is right cure at right time for infrastructure issues in the neighborhood.

Judy Chudak, 2669 Crawford, says she's OK with the Chase Bank proposal, but wants to make sure some other sort of drive-thru that might be less desirable for the community.

"Time to stop drinking the purple Kool-aid," says one speaker opposed to the visitor center proposal.

Alderman Coleen Burrus,9th Ward, says the city can't afford to build a new Crown Center and she hopes the council will approve going ahead with further negotiations with the proposed developers.

Parks Director Doug Gaynor says hopes to identify one of the two responsive developers to be the project to go forward with on the project.

Alderman Ann Rainey, 8th Ward, asks whether the council can revise the plans for the project at some time in the future.

Gaynor says yes — once have better understanding of the differences between the proposals.

City Manager Wally Bobkiewicz says need to resolve what want pretty soon. As is the proposal is for an ice facility with some ancillary community center recreation space.

Rainey says she's not clear about what the proposal should be. Says have variety of proposals for various recreation facilities on other sites in town.

Wilson says ice time is high revenue potential which could generate the cash flow to pay for the facility. Says for other sports there's less chance of generating sufficient revenue.

Aldermen vote to approve further talks with the developers.

A 5 – ROW lease withChicago's Home of Chicken and Waffles.

Staff says have water infiltration issues that need to be repaired.

Grover proposes amendment. Says want to connect city bike path to Northwestern's bike path — which the lease would do.

But says don't need to actually lease the land to Northwestern to accomplish that. Want NU to build it and pay for the maintenance of it.

Says NU would still make payments for the temporary construction easement, and for landscaping improvements. Says city would do the maintenance of the path, but NU would pay for it — $10K a year for the 25-year-term of the agreement.

Alderman Judy Fiske, 1st Ward, says she has some problems with the amendment.

Says if city is going to control the land, doesn't see any reason to remove the trees or the wildlife habitat.

Says should push the building back on the NU campus as the Preservation Commission proposed.

Says there are endangered species and plants in the area that shouldn't be disturbed.

Says NU should make a larger contribution to the city.

Says an open parking garage will be facing the beach.

Wilson said he appreciates comments he's gotten pro and con on the issue. Says has done research on it and visited the lakefront today.

Says if look at this in the historical context, in the 1960s Fisk Hall was right up to the lake. Just separated by a very ugly parking lot from the water.

Says believes overall this project will be an improvement.

Approved 6-1. Fiske votes no. Burrus recuses herself. (And Wynne is absent tonight.)

Tendam says he supports the proposal.

Grover says the plan has been adjusted to accommodate neighborhood concerns. Says she thinks the bank would be a much less noxious use than the Citgo gas station was.

Fiske says no plan is perfect. But would take an extraordinary public benefit to the new project to make her change her mind — doesn't think it's there. Will vote against the bank proposal.

Community and Economic Development Director Steve Griffin says next steps, assuming approval tonight, would be review by Site Plan and Appearance Review Committee, then the Zoning Board of Appeals, then the Planning and Develpment Committee and the full City Council.