Mayor announces that Northwestern's football team will play in the Gator Bowl.

Three police officers take the oath of office for their promotions: 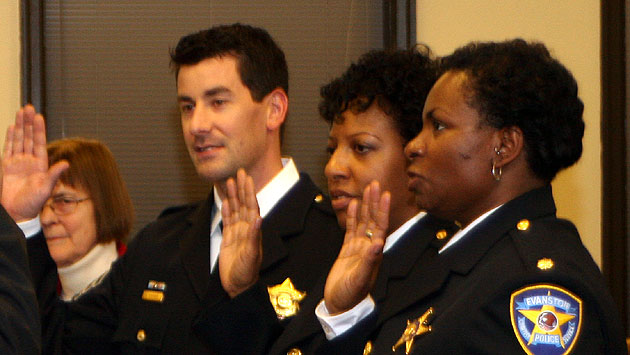 The promoted officers recite their oaths of office.

Public works schedule will be delayed for Christmas and New Years holidays.

A packet with information on tonight's agenda items can be found online here.

City Clerk announced that revised filing period for City Council elections will run from Dec. 17 through Dec. 26. On Dec. 26 absolute deadline is 5 p.m.

Susan Trieschmann of Curt's Cafe speaks in support of a request for city funding for the career training program for youthful ex-offenders. Some neighbors also speak in support of the program.

Manager of Chicago's Home of Chicken and Waffles speaks in favor of the restaurant's request for a facade improvement grant and says he plans to have the business open by the end of the year.

Public Works Director Robinson reports on plans for resurfacing work next year. Says much of it is tied to water and sewer main replacement work.

Will have a new five-year plan for 2014-18 ready for City Council review next spring.

Details on the proposals are in the council packet.

Projects are spread across all nine wards.

We'll note any items taken off the consent agenda.

Alderman Jane Grover, 7th Ward, says staff has determined that the vendor who claimed not to have heard of the bid opportunity in fact actually had received notification of it.

Alderman Coleen Burrus, 9th Ward, says she doesn't think the TIF is necessary and will vote against it.

Alderman Don Wilson, 4th Ward, notes that the vote is only for introduction tonight. Another vote will be needed at the next City Council meeting.

City Manager Wally Bobkiewicz says after meeting with Main Street Merchants Association members some revisions to the proposal will be included in the final version of the TIF proposal to be presented to the council on Jan. 14. Says it will include an oversight panel for TIF expenditures composed of members of the business district.

Three ordinances for this. Approved 8-1. Burrus votes no on each

Grover says committee wants amendment to include penalties for defacing all public art, not just murals. Ordinance is introduced as is on unanimous vote. Council will get revisions before final vote on Jan. 14.

Approved 7-2. Rainey and Burrus vote no.

Approved, with amendment eliminating them as possible use in industrial zones. Would be a special use in a range of other non-residential zones.

Amendment to previously approved special use. Burrus says she objects to eliminating preference for Evanston residents.

Rainey says she has no objection to changing the use of the 99 beds (skilled versus sheltered care), but says has objection to reducing the 8 beds reserved for Evanston residents.

Grover says having the eight public aid beds is something she's reluctant to lose.

Bobkiewicz suggests would favor coming back with a revised ordinance at the next meeting.

Steve Freeland, attorney for Alden, says the reason for the request is that could get up to 99 skilled beds under state regulation. Says appreciates that no one on council has a problem with that.

Says city staff was unable to find any other nursing homes with similar restriction requiring a certain number of Medicaid patients.

Says at times don't have that many patients in the facility. Doesn't want to have to leave a bed open to meet the requirement.

Alderman Mark Tendam, 6th Ward, says from talking to former staff, believes that management of the property is much better now than had been in the past. Says Commission on Aging doesn't seem to have data to support.

Rainey says there obviously are more Medicaid patients in Evanston — Alden needs to find them.

Rainey revises her motion to ask city staff to redraft the ordinance to split the issues regarding use of the beds and the reservation of eight beds for Medicaid patients.

Tendam says the cafe has brought the entire community together and has produced really good results.

Suggests increasing the mount of the loan.

Burrus says she has concerns about loaning money to an organization that's not financially stable — whether it does good work or not.

Susan Trieschmann, in response to question from Burrus, says Curt's Cafe is a non-profit, but doesn't yet have its IRS 501(c)3 status approved.

Trieschmann says cafe is being charged by her less rent than the building is worth.

Burrus says she's concerned about being asked to bail out a business that hasn't gotten its act together.

Says city can't seem to live within its own budget — given pension and other debt — doesn't think should be giving money to people and not holding them accountable for developing a successful business plan.

Grover asks how long it took to raise the $16K. Is told it took two weeks.

Grover says the business doesn't appear to be as unstable as Burrus has suggested it is.

Alderman Judy Fiske, 1st Ward, says it's a difficult issue for a number of us. Says cafe is doing great work. But has experience with starting a not-for-profit. Says never considered asking the city for support for that. Says doesn't think the city's economic development fund is the place to go for this money. Could raise it from private sources. "My head says there are lot of problems here," Fiske says.

Says would rather the proposal came back at a later time after 501(c)3 was approved and after had raised more funds privately.

Rainey asks about the training grant. How's it going to work. Trieschmann says all the work would be done on site at the cafe. Rainey says would like to see a budget that details who's going to get the money and how it will be disbursed.

Mayor Elizabeth Tisdahl says Curt's Cafe is reaching kids that other non-profits are not. Says wishes they had gotten the 501(c)3 first – – but thinks they will be successful in the long run. Urges residents to take friends and neighbors to go eat there.

Tendam says opening Curt's Cafe was a gutsy move. Says it's an important part of the city's anti-violence efforts. Says it would be a horrible shame not to support it. Says it has so much energy and vitality and is so popular and so easy to believe in that people are making it happen.

Says it's one of the most lively, energetic and positive things going on in the city

Alderman Peter Braithwaite, 2nd Ward, asks what's the cost to the community every time a youth loses his life to violence. Asks what's the annual cost to keep an inmate in prison?

Says he's convinced that the cafe will make it, given the outreach she's doing. Says it's the best investment of the taxpayers' dollars.

Alderman Delores Holmes, 5th Ward, says the concept has been looked at for at least a couple of years. Says the proposal is for a mix of a loan and a grant for training success.

Says she will support the proposal tonight. Says we cannot do enough to try to provide as many opportunities as possible for youth that have made mistakes, gotten on the wrong path, need to provide an avenue for them to become good, productive, law-abiding citizens.

Rainey moves holding off on the grant and approve $15,000 loan for the kitchen. Says she supports loans to for-profits and not-for-profits.

Says the money is not for back rent, not for publicity. Says she's been to Curt's Cafe, with Alderman Tendam, says it was absolutely delicious. Urges completion within a month.

Says a lot of things happen that are not anticipated. But says have tangible program that's doing good work now. Says Youth Job Center has an excellent program — doesn't see any need to postpone the grant.

Alderman Melissa Wynne, 3rd Ward, says just the money the city has had to spend on policing work in just the last few weeks dwarfs the money that's being talked about for the cafe.

Says is confident the cafe will ultimately get its 501(c)3 status.

Rainey says she wants to know more about how the training grant will be administered.

After some parliamentary confusion, vote is taken on just the $15,000 loan proposed by Rainey.

Intent is that the $20K grant proposal will come back to the council, with more detail, in January.

Burrus objects that business has already received $200K in loans from the city. Opposed to the $8K grant for the facade improvement.

Fiske says the facade work was presented as part of the original loan. Says some unexpected plumbing expenses led to the request for facade funds. Says a lot of businesses in town have been faced with the same expenses — says supports the business, but can't support this grant.

Holmes says it was a legitimate request for facade improvements — for awnings and signage.

Says the loan will be paid back. If it's a legitimate request for a facade, she says, shouldn't mix it up with the loan.

Braithwaite says he's concerned about the tone of the conversation about businesses in town. Says the business here has been proven in Bronzville and in Oak Park, now have the chance to bring it to Evanston.

Says the business will generate a lot of tax revenue for the city and provide jobs to youths.

Fiske says city doesn't seem to have a consistent policy for how to spend its economic development funds. Says she shares concern of Burrus about that.

Rainey says council is following policy. Has a rebate program for facade improvements. Thinks this business is entitled to it, just like others are.

Approved 7-2. Fiske and Burrus vote no.

Wynne — congrats to ETHS choir that sang at the White House over the weekend.

Holmes — Saturday at 10 a.m., prayer vigil at Darrow and Simpson. And at 11 a.m. Saturday at Christ Temple Church, the gun buyback. And 5th Ward potluck Dec. 20 at Fleetwood.

Grover mentions new two-mile walking path that starts at the Ecology Center. Loops through the arboretum and Twiggs Park.