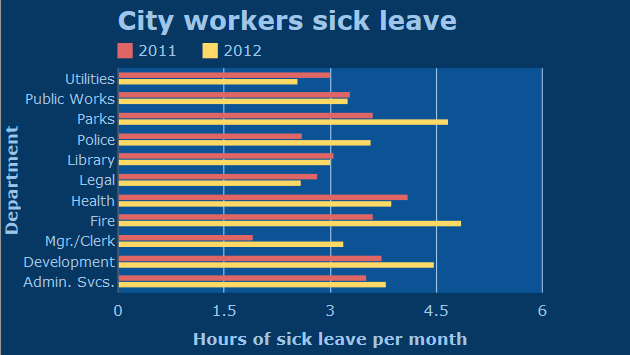 Evanston city employees increased their use of sick leave last year by nearly 21 percent over the year before.

That means that Evanston city workers went from taking somewhat less than the 3.6 hour national average of sick time per month for government workers, based on a 2010 report by the Federal Bureau of Labor Statistics, to slighly more than the average.

City Manager Wally Bobkiewicz released the figures by department this morning. Multiplying the departmental averages by the number of employees in each department made it possible to calculate overall average figures for the city's workforce.

The Evanston city workers still take substantially less time off for illness than workers for Cook County government, who at last report were taking an average of 6.64 hours a month of sick leave.

Update noon 3/26/13: In a follow-up email, Bobkiewicz said city employees in 2012 had "more babies than we have seen in many years" and so took more time off for maternity leave, and that a number of employees "had more difficult longer-term illnesses."