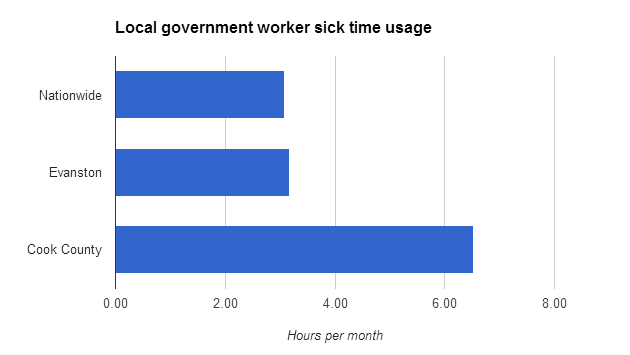 Despite a decline in sick time usage, Evanston city worker were still off the job for illness a bit more than the national average for local government workers last year.

But they called in sick far less often than workers in Cook County government.

The 2013 national data –which works out to an average of 3.08 hours lost to sickness each month for employees working a standard 40-hour week — comes from a report by the federal Bureau of Labor Statistics, which, among other things, shows that local government workers tend to be off sick about 20 percent more than the average for all workers, but somewhat less than their colleagues in the state and federal governments.

The county data — an average of 6.52 hours per employee per month for a 12 month period ending last November — comes from a performance report by County Board President Toni Preckwinckle — who's pledged to cut the average sick time at the county.

That report indicates she's made some progress in reducing sick time among employees under her direct control — but that sick leave rates among employees who work for the county's other elected officials remain abnormally high.

The city figure — an average of 3.17 sick leave hours per month — comes from data for 2013 released this week by the city. 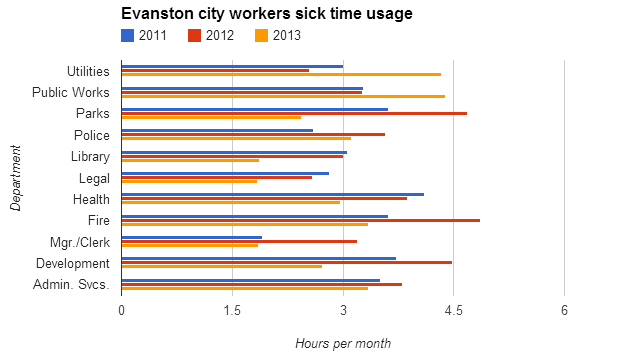 Evanston's level last year was down 21 percent from its 2012 level of 3.84 hours per month — returning to essentially the same level as in 2011.

City Manager Wally Bobkiewicz said the jump in 2012 was related to a surge in pregnancies and a number of employees experiencing more difficult long-term illnesses.

The sick leave rates vary substantially among departments — with units that have a lot of employees working outdoors and with heavy equipment tending to have higher sick leave rates.

Some of the year-to-year changes among the departmental figures resulted from reorganizations that moved some groups of workers from one department to another.

Bobkiewicz says he hopes the city's "continued focus on employee wellness and a healthy work environment" helps limit the time lost to illness.

"When all city staff are here working together, every task is a little easier. And Evanston residents win knowing that they are getting our best efforts year-round." Bobkiewicz added.