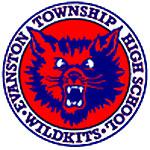 You can count on one hand the number of sectional baseball championships won by Evanston in the long history of the state tournament series.

Make room for another plaque. Evanston is back on the baseball map.

Another dominant pitching performance by junior right-hander Russell Snapp, and a solo home run by Jackson Mihevc, powered the Wildkits to a 3-2 victory over arch-rival New Trier Saturday in the championship game of the Class 4A Loyola Academy Sectional.

Coach Frank Consiglio’s squad matched the sectional titles won by ETHS in 1992 and 2003 and will take a 23-13-1 record into Monday’s supersectional at Schaumburg. South Elgin (23-10) will be next hurdle, after upsetting top-seeded Batavia 8-3 at the Schaumburg Sectional.

Winner of that 6:30 p.m. contest will advance to the Final Four next Friday and Saturday in Joliet.

A dig into the history books also says that the Wildkits likely haven’t swept the Trevians in three games in a single season, but staying alive in the postseason was really what Saturday’s effort was all about.

Mihevc hit only the second home run of this baseball career — the other came in Cooperstown (N.Y.) when he was 12 years old during a summer tournament — and at the time it just seemed like an insurance run, coming in the sixth inning with Snapp and Co. already enjoying a 3-0 lead.

As it turned out, Mihevc’s hit was the game-winning blow because New Trier catcher Logan Wible slugged a 2-run homer with two outs in the bottom of the seventh. Snapp regrouped to retire the last hitter, Max Thoma, on a fly ball to Mihevc to end the game.

“When you think about baseball in this area, you think about New Trier or Maine South or Loyola,” said Mihevc following the post-game dogpile on the mound. “It just feels so good to win this. It’s awesome to see Evanston have this kind of success, and to be able to put Evanston back on the map. It will never be forgotten, especially by the seniors.

“All the seniors talked about was how tough it is to beat a team like your rival 3 times in a season, but we were so well-prepared by the coaches. For us to put it all together like we have, I’m just speechless.

“All Russell needs is 3 or 4 runs and that’s the ball game. I just get a tan standing out there in left field while he’s putting on a show on the mound. He’s just so consistent out there. He’s awesome.”

Snapp stopped the Trevians with a 3-hitter and only faced four batters above the minimum before running into some trouble in the seventh.

The first New Trier hitter, Matt Boscow, swung at a curve ball that bounced two feet in front of home plate and catcher Sam Evans had no chance to throw him out. Two outs later, Wible hammered a fastball over the left field fence.

“By the seventh inning I was getting a little tired,” Snapp confessed. “But I didn’t let that home run get into my head. I knew we were at the bottom of their (batting) order, so I just kept attacking and it worked out.

“So many people were talking about this game and I was nervous because I’ve never pitched in front of this big a crowd. But I was able to settle in and find my groove pretty quick. This just feels awesome, and hopefully I’ll get one more chance to pitch this year.”

Snapp allowed just 2 singles — to Frank Nicholas in the second inning and Scott Hammes in the sixth — prior to Wible’s blast. He struck out 3 and walked 1 while improving his mound record to 8-3 this spring.

Evanston’s pitching has been so solid this spring that it’s easy to forget that it was one big question mark for Consiglio coming into the season.

“I thought we had the game under control all along, even when they hit the home run,” said the ETHS coach. “We have complete faith in Russell. He was dominant today. As a starting pitcher, he has that rare ability because we feel he’s better in the fifth, sixth and seventh innings. He gets better as the game goes along. Once he gets into the game mentally, he’s very tough to beat. He was fantastic today.

“To beat a team like New Trier three times in one year . . . not many teams could do that. I’m so proud of these guys. My message to the kids today was that when it’s their turn to come back here for a game in three or four years, like you saw some of our other (ex) players do today, everyone will know that you were part of this team. This is a community, and this is what you’ll be remembered for.

“This was our 6th chance (in the postseason since Consiglio was named head coach), so believe me, I know how tough it is to get here. Now there are only 8 teams left, and we’re one of them.”

The first of three errors committed by the Trevians (21-18) opened the door for Evanston’s rally in the second inning. Marty Fenn reached on the miscue, moved to second on an infield out, and scored on singles by Mihevc and designated hitter James Allen against New Trier starter Matt Cohen.

No. 9 hitter Mackenzie O’Neil delivered a 2-out double down the right field line to plate the second run.

Evanston left the bases loaded in the fourth and again in the sixth. But Mihevc’s home run leading off the sixth might have been the most unexpected blow of the season, even though the senior is batting well over .300 this season.

Most of Mihevc’s power is to the opposite field. The blast was especially impressive because it came against a hard-throwing lefty — New Trier sophomore Ben Brecht — who had struck out the side when he entered in relief of Cohen in the fifth.

“I knew they were going to try jamming me and that’s what I worked on this week in practice,” Mihevc said. “I just opened up the barrel a little, and I got to it.”