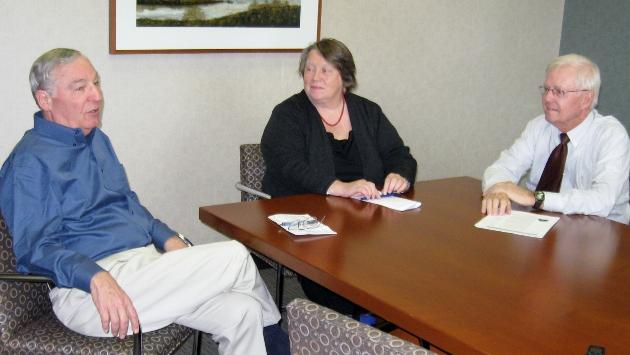 What can a community do with a $150,000 gift? Evanston answered that question a quarter of a century ago by creating the Evanston Community Foundation, whose endowment now has grown to some $16 milllion.

That $150,000 gift came from Baxter International after it purchased American Hospital Supply and moved its operations out of its headquarters building in downtown Evanston that now houses the world headquarters of Rotary International.

In anticipation of its 25th anniversary celebration Saturday night at the Woman’s Club of Evanston, ECF's executive director and two of its early board chairmen sat down with Evanston Now to talk about where the organization has been and where it is going.

The three were Sara Schastok, president and chief executive officer of the Foundation; James C. Lytle, a managing director of First Evanston Bancorp, Inc.; and Karl Berolzheimer, former general counsel of the Centel Corp. All three live in Evanston.

Lytle was chairman of the Foundation in the late 1990s and was the architect of its strategic plan that led to the hiring of Schastok in 2000, when Berolzheimer was Foundation chairman. Schastok was a fundraiser at the University of Chicago before she was tapped for the ECF post, where she was its first fulltime staff member.

Until that time, the Foundation was run part-time by the executive director of the United Way of Evanston, which also had a major endowment fund at ECF that came about as a result of the sale of its office building on Davis Street in Evanston.

Although the Foundation now has $16 million in endowment assets, Lytle and Berolzheimer said their strategic plan at the turn of this century had a 10-year goal of $7 million, scaled down from $10 million that the board at the time had deemed to be an unrealistic challenge.

Some of the growth during the last decade has come from donor-designated funds, where a fund has been established by a group that wants to fund a particular activity.

An example is the Bruce E. Mitchell Short Story Fund, founded by a mens short story group for the purpose of encouraging the art of short-story writing at Evanston Township High School, where Mitchell taught English for 32 years.

The group pooled their donations to set up the fund to provide an annual cash award to one or more juniors at ETHS for their short-story authorship. By setting up the fund within ECF, the donors were able to take advantage of the Foundation’s ability to invest those funds and to handle the administration of the grant to the winners of the competition.

Since 1986, the Foundation has awarded more than $4.2 million in nearly 544 grants to more than 175 organizations. During that time, its investment performance has averaged 9.1 percent, although it varies widely from year to year. For the past three years, since the stock market crash of 2008, its average annual performance has been 10.6 percent.

The grants fall into three categories—annual “responsive grants,” made to organizations that apply for grants for specific projects; “root2fruit” grants that strengthen and support fledgling groups who need an extra financial push to grow and prosper; and Communityworks grants that are based upon a theme that involves several groups within the community.

Communityworks grants go to organizations that provide home visiting and family support services and  help youngsters from birth to kindergarten to learn the basic academic skills, such as reading and counting, that form the basis for the kindergarten experience.

In this case, the Foundation functions as a central point for several organizations in the community to coordinate their activities to achieve a common goal.

Some 78 percent of the Foundation’s funds comes in the form of unrestricted gifts or in so-called “field-of-interest” gifts that enable a donor to specify a general area — such as arts, literacy, or the environment — to be funded. The rest comes principally from donor-advised funds and special endowments.

The Foundation has established a Burnham Society, in honor of Evanston’s notable urban planner, Daniel Burnham, of “make no small plans” fame. Members of the Burnham Society have agreed to make contributions to the Foundation as a part of their estate planning.

As for the future, the interviewees see a continuance of the push for unrestricted funds and for projects that enable the organization to rally other groups in Evanston behind a single broad goal.

Lytle sees opportunities for growing the endowment and for facilitating the conversation on community issues.

Schastok echoes that sense of optimism and adds: “The important thing about our 25th anniversary is less about what we have done and more about what we will be doing. We look forward to passing that $25 million threshold to build more resources for the community and to be responsive to the community’s needs."