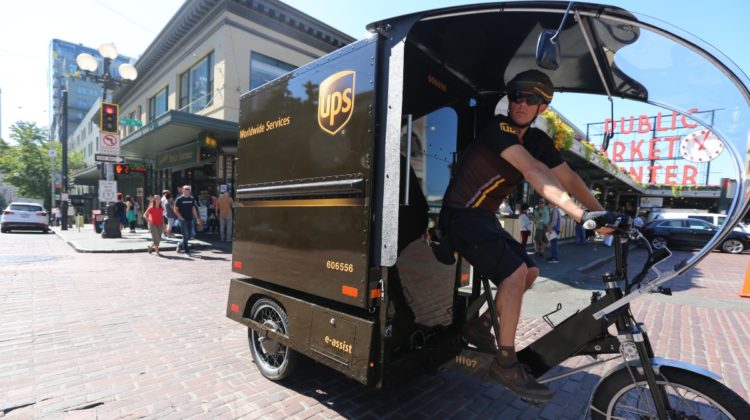 With far more package delivery trucks on Evanston streets these days, city officials might ask companies like FedEx, UPS, and Amazon to use three-wheeled electric cargo bikes to cut pollution and reduce wear-and-tear on roads.

Chicago just approved such bikes, which cannot go more than 20 miles per hour, and must run on streets, not sidewalks.

Jessica Hyink, Evanston’s transportation and mobility coordinator, says discussions are “very preliminary” right now, but the idea is on the table.

Hyink also told a City Council committee last week that even before COVID-19, the growth of online shopping “resulted in a massive increase in package delivery.”

The coronavirus gave such shopping and delivery an even bigger boost. Hyink said that nationwide, online shipping increased by more than 30% in the first half of 2020 versus the same period last year, and grocery delivery has tripled.

Hyink tells Evanston Now that package delivery companies could use electric cargo bikes in Evanston now if they wanted to. It’s legal. But, she says there’s a big difference between this city and the larger one just south of us.

Unlike Chicago, she says, Evanston does not have any central distribution warehouses where the bikes could receive their packages and then head out. She says that makes delivery firms using such bikes in Evanston “unlikely without incentivization from the city.”

But the city, she adds, does not have the money. Instead, she says, “We’re trying to consider if they’ll do it” without a financial aid package.

Hyink also told the committee that there is another way, which is to increase the cost of running the diesel-powered delivery trucks, so companies look for a less expensive option.

Hyink said package delivery trucks are the only vehicles on Evanston streets that are not taxed. (By contrast, you have to pay a “wheel tax” for your personal car.) Taxing the trucks, she suggested, could raise money for street repairs and give the delivery companies an incentive to use something cheaper and non-polluting.

Other ideas are to tax each item delivered, or tax each stop a delivery company makes. Another possibility, Hyink said, is a “congestion tax,” which charges vehicles a fee if they drive during the more crowded times of day.

It’s important to point out that no decision has been made on any of these options, and there is no schedule. What’s going on now, she says is just a “conversation starter.”