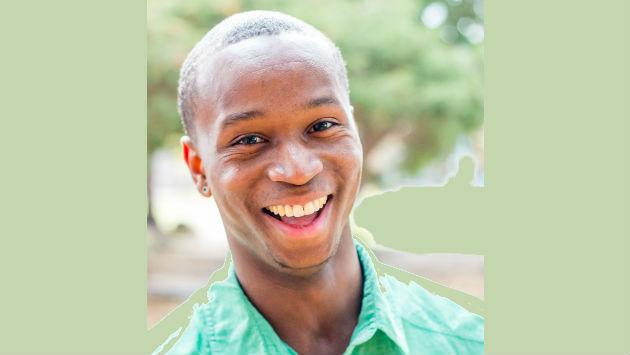 An Evanstonian will take on a new role in more ways than one when Raymond Goodall takes the stage this weekend in Music Theater Works’ new production of Leonard Bernstein’s “Candide” at Cahn Auditorium.

Goodall who takes the role of Candide’s faithful and worldly-wise companion Cacambo, has performed widely as a dancer, but “Candide” marks his professional debut in a featured acting role.

Goodall embarks this fall on his final year at Roosevelt University, earning a B.F.A. in musical theatre with a concentration in dance, but Evanston is where it all began. He first started dancing as a boy at Evanston’s New Hope Church. “Mama made me!’ he laughs.

But his interest in dance really took off when he was attending King Lab School, where the artists-in-residence program brought African dancers to the school in his fifth grade. “I loved it,” he recalled. “They had so much energy!”

Work with Dance Center Evanston, North Shore Dance Center and Joel Hall Dancers followed. After graduation from King Lab in 2009, he was accepted into the first class at Chicago High School for the Arts, from which he graduated in 2013.

He decided to enter the musical theatre program at Roosevelt, in order to add more singing and acting to his already considerable dance experience. “It’s important to be well-rounded.”

While pursuing his studies, Goodall has worked with many dance companies in the Chicago area, and has already appeared with Music Theater Works, dancing in the ensemble of “Guys and Dolls.”

But when the call came for “Candide,” the demands of the role took him out of his comfort zone. “When I was called in for the part, I almost didn’t go. I was nervous. I saw the music, and I thought, ‘Can I sing this?’” Ultimately, he went to the audition. “Just go and do it—that’s part of the job.” He got the part. 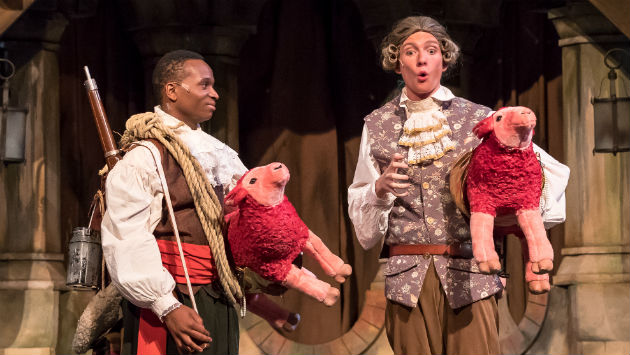 Raymond Goodall as Cacambo and Ben Barker as Candide with the sheep that are the source of their — temporary — riches.

Goodall is enthusiastic about “Candide.” “People are going to love it. It has such beautiful and challenging music, and a story that takes you all over the map.” He tells the audience to “be ready to go on a journey!”

As he begins his own professional journey, Goodall values the role Evanston has played in his artistic life. He does not know where his career will take him, but eventually, “I really want to give back to Evanston–I’d love to come back here and teach, create a center for dance and music and acting. I’ve had so many great opportunities here, and I’m really grateful.”