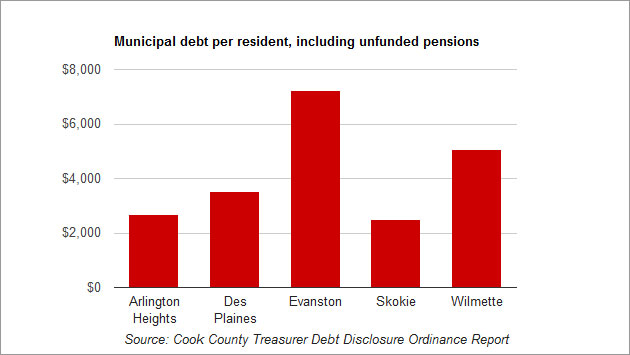 Figures recently released by Cook County Treasurer Maria Pappas show that Evanston residents are shouldering a higher municipal debt burden than most other taxpayers in the county.

Of nearly 120 cities and villages in the county, only two — Lemont and Willow Springs — had a higher ratio of debt to operating revenue than the 383 percent ratio in Evanston.

And calculated as debt burden for each resident, Evanston's debt, when unfunded pension liabilities are added, reaches $7,220 — nearly three times the level in neighboring Skokie.

Those figures don't include the burden for county government or local school districts, which would add nearly $4,000 more to the average Evanstonian's local government debt liability.

As a step toward reducing the debt burden, City Manager Wally Bobkiewicz is proposing to fund about $2 million of next year's capital improvement projects from current tax revenue rather than additional borrowing.

But that will make only a small dent in a debt burden, excluding unfunded pensions, that now totals nearly $333 million.