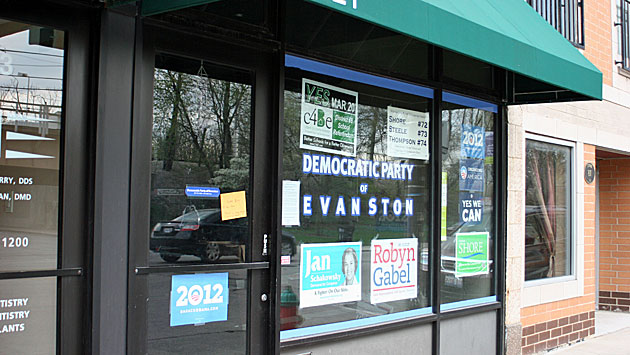 A third of the directors of the Democratic Party of Evanston have quit the group in the past several weeks in a dispute with local elected officials over the group's direction.

The Democratic Party of Evanston office at 821 Chicago Ave.

A third of the directors of the Democratic Party of Evanston have quit the group in the past several weeks in a dispute with local elected officials over the group's direction.

By contrast, Gilpin said, the board had been trying for the past four years to build "a truly grass-roots, bottom-up operation."

She said she saw the organization's role as advancing the progressive agenda, not just in Evanston, but where volunteers could have the most impact, locally and nationally.

She said party volunteers had been active in the nearby 10th Congressional District in 2010 and had played an important role in recruiting volunteer attorneys to fight efforts to disenfranchise voters in battleground states in national elections.

"We had a fundraising and consciousness-raising event last September that drew people in who'd never been to one of our events before," she added.

Adam Finlayson, who resigned as board president, said the board members who left "wanted to broaden our focus beyond just electoral politics," but that because the elected officials "have the power of the purse" the board was constrained in doing that.

Gilpin said the group raises about two thirds of its funds from membership dues from its several hundred members and from other contributions, but that it gets the other third of its funds from elected officials who represent Evanston.

One of those officials is State Sen. Jeff Schoenberg, who, while he's resigning from the senate at the end of this term, plans to retain his role as the party's township committeeman.

Schoenberg did not respond to calls Thursday seeking his comments for this story.

But another elected official, County Commissioner Larry Suffredin, dismissed the resignations. "There's always a natural amount of turnover, especially around primary or general elections," Suffredin said. "I don't think there's a story there."

Suffredin said the issue is making sure there's a balance between organizing for party success in local elections and being involved at the national level.

But Gilpin said that in Evanston, "where progressive Democrats enjoy comfortable re-election margins," many on the board believed the group could focus on broader goals.

Gilpin added that she has nothing but support for the elected officials in their legislative roles. "They are progressive heroes for many folks, and me, too."

But she said she's now trying to figure out whether there's a market "for the kind of work we've been doing, for a truly active, progressive organization that serves the community."