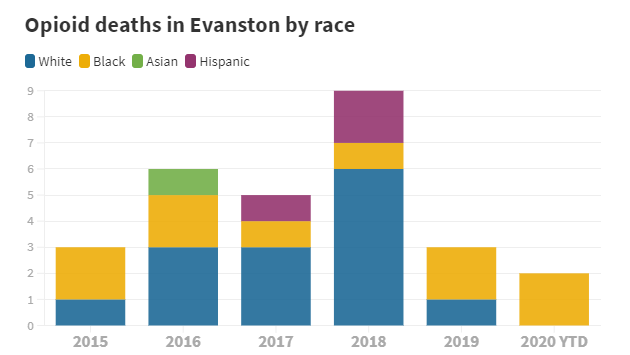 Evanston so far seems to have largely escaped a surge in opioid deaths this year that officials say is ravaging much of Cook County.

County officials at a news conference today said the county is on track to double the number of opioid-related deaths recorded in 2019, and Black residents are disproportionately likely to become victims of the opioid epidemic.

Cook County Board President Toni Preckwinkle said the increase is an example of “the dangerous consequences we face as a result of decades – centuries – of racial inequities.”

“While much of this year has been consumed by our fight to contain COVID-19, which has disproportionately impacted our communities of color, we’ve had to contend with skyrocketing homicide rates which almost universally took the lives of Black and Brown people and we must face the devastating toll the opioid crisis is taking on our community as well.”

While African Americans make up under 24% of the County’s population, they account for half of all opioid deaths in the County this year.

In Evanston, where Blacks make up about 17% of the population, they have accounted for about 37% of the opiod deaths over the past five-and-a-half years.

Last year, the Cook County Medical Examiner’s Office confirmed 605 opioid overdose deaths between Jan. 1 and July 13. This year, that number stands at 773. But that only tells part of the story. The Office is still awaiting results of 580 pending cases. According to Chief Medical Examiner Dr. Ponni Arunkumar, 70% to 80% of those cases will be confirmed as opioid overdoses.

This means that there are already about 1,200 opioid toxicity deaths in Cook County this year.

In 2019, the Medical Examiner’s Office confirmed a total of 1,267 opioid overdose deaths. In 2018, the Office confirmed 1,148. The victims are overwhelmingly people of color. Of the 773 cases confirmed this year, 63 percent are Black or Latino.

“Our Office is used to dealing with death, but we will never get used to the tragedy that each death represents,” said Arunkumar. “While we concentrate on our mission to establish the cause and manner of death for the cases that fall under our jurisdiction, we do not accept that they had to occur. These deaths are preventable, and we have a responsibility to do all we can to stop as many as we can.”

“We are working to keep patients safe by breaking down barriers to access through telehealth visits, frequent team-based engagement and outreach, access to naloxone for overdose prevention, and longer prescription supplies to avoid disruptions in care,” said Dr. Nowinski Konchak.