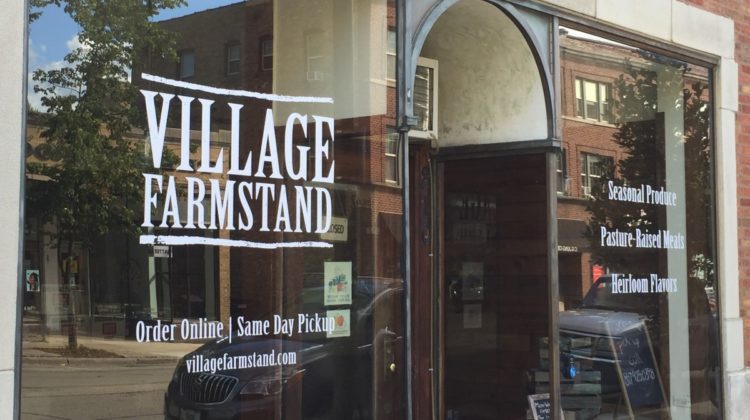 The Village Farmstand at 810 Dempster St.

“I wouldn’t be doing this without the pandemic, no way,” Wechsler says about his new Dempster Street grocery market, Village Farmstand.

Wechsler thinks he has found a niche — people in Evanston who believe in the sustainable agriculture movement. Village Farmstand, which opened Wednesday, buys only from farmers who do not use pesticides to grow their crops, and from those who do not rely on hormones to fatten their animals.

“There are a lot of progressive thinkers in Evanston,” Wechsler says, and he’s banking enough of them will be willing to give up the big grocery store in favor of an online market which buys only from area farmers.

Wechsler is doing something, perhaps minus the finger reference, which Linda Darragh, professor at Northwestern’s Kellogg School of Management, says is necessary for a business to succeed in a horrible economic climate.

Before starting up or expanding, Darragh says, merchants need to zero in on a specific question: “Who is my customer, what do they want?”

“People love the alley,” Barrett says, “but we never had street visibility. We were never able to do a window display” which pedestrians could notice, and decide to walk in and buy something. “We had our eye out to get a foothold on the street,” she says, and when the CouCou site at 1716 Sherman Ave. opened up in June, she jumped.

Barrett has already survived two book business financial pandemics before COVID-19 — the big box bookstore which was Barnes and Noble less than a block away, and the 800 pound e-commerce gorilla, Amazon, with cheaper books delivered faster.

But by asking “who is my customer, what do they want,” Barrett was able to survive and now even expand. “To people who love a store like ours,” an independent bookseller, “getting a cheap book is not the whole thing.” The lure of “a cozy, inviting, well-curated environment” is a lot different than just ordering online from a market monster. But still, out of competitive pressure and pandemic reality, Bookends and Beginnings has also grown its e-commerce presence.

Darragh says businesses which can pivot during hard times may be more likely to succeed than those that try to hang on doing the same exact thing. Merchants should ask, “Who else can use my services?” Don’t only rely on who your customers were before. They might have lost their jobs.

By expanding, Bookends and Beginnings can add stationery and gifts, which could become a whole new market for people walking by. But expansion also opens up more space in the existing bookstore for different volumes, particularly children’s books.

At Village Farmstand, the economic crisis that hit farmers due to COVID-19 gave Wechsler a way to help those individuals, and start a new business he believes in, but which he still expects to make a profit. Wechsler is a film producer, whose 2016 documentary, “Sustainable,” focused on the type of agriculture which inspires him. But since COVID hit, many small, sustainable farmers have been crushed, unable to sell to restaurants that downsized or even closed.

So Wechsler is buying from those farmers, packaging the food at his store and selling it to customers who order online and then pick up curbside. It’s a niche market, for sure, just like an independent bookstore. Most people will still go to a huge supermarket, or buy books through Amazon. But business owners who can figure out what niche can work may be here long after the pandemic is gone. “Somebody needs to open a store like this,” Wechsler says. His next step was, “Well, I guess I have to do it.”

Merchants who feel overwhelmed by the pandemic economy can actually get free consultation from experts connected to Northwestern. Darragh founded the Kellogg Small Business Advisory Initiative, which pairs business owners with Kellogg alumni. Government aid might help in the short run, but then what? Darragh says.

If finding a niche business may be critical, it helps that Evanston is also a niche community, affluent, educated and progressive — a good place to try something new. “The population here is eager and receptive to change,” says Wechsler. And says Barrett, who has outlasted the now-closed Barnes and Noble, “to me, Evanston was the demographic you would invest in to support an independent bookstore.”

Now, those two merchants are betting that customers will, as Barrett says, “vote with their dollars” for those taking a chance in tough times.