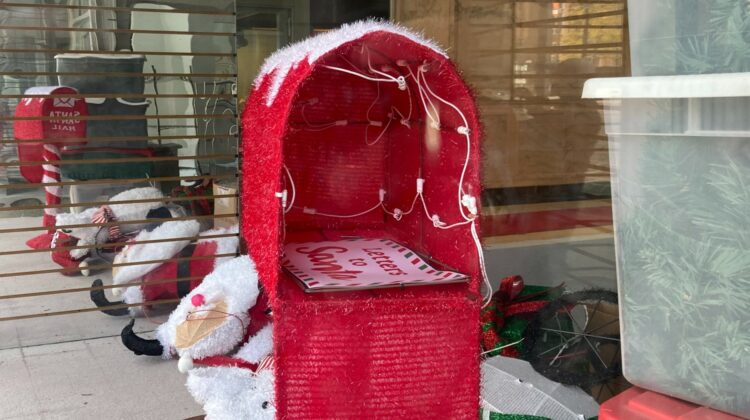 We all know that Evanston can be as frigid as the North Pole when winter hits. So perhaps it’s only appropriate that several thousand children’s letters to Santa Claus will end up here.

And will be answered with presents, too.

A charitable organization called Santa For A Day began moving in to the vacant Williams Shoe Store on Church Street on Monday, as a popup location for the season of giving.

According to its mission statement, Santa For A Day “provides holiday gifts, basic needs and educational supplies for economically disadvantaged children” ages 5-12.

Headed by Evanston resident Rich Gentile, Santa For A Day matches youngsters in need with donors looking to help.

With letters coming in and presents going out, Gentile says the former shoe store will be buzzing with “the magic of Santa’s workshop.”

Santa For A Day began in 2018 in Chicago, and has since expanded to Boston, Philadelphia, Atlanta, Detroit, and Milwaukee. If that sounds like a National Basketball Association road trip, you’re right. Some NBA teams are involved in helping Santa For A Day.

Gentile says the idea for such a program hit him more than 20 years ago, when he was sending out nearly-last-minute Christmas packages at the Downtown Chicago post office on a Dec. 23.

“It was just me and the clerk,” Gentile adds.

Back then, the post office used to put out stacks of letters to Santa, in the hope that postal customers would grab a letter or two and respond with a present.

Gentile says of the 10,000 or so letters at the postal facility, the clerk said “maybe 100” were actually taken.

“My kids were young then,” Gentile says. “It broke my heart to think of all those letters that went unanswered.”

So, on and off for years, Gentile says he tried to convince the post office to modernize the distribution of letters to Santa, so more kids could be helped.

Finally, with the assistance of U.S. Rep. Danny Davis, Gentile organized Santa For A Day, to get the job done.

A database of low-income children who live in public housing facilities has been developed. Each child gets to write a letter to Santa with three wishes: an educational item, a toy and something the family really needs. The housing agencies collect the letters for Santa For A Day, which then matches donors, gifts and kids.

The presents will all come to the Evanston site, get wrapped with holiday paper and a bow, and then go out for delivery, not by sleigh, but with assistance from Google, Amazon and Uber Freight.

There’s more to the program as well. Santa For A Day has a literacy component, with volunteer tutors helping children craft the letters in October, and “Thank you Santa” letters in the spring.

Besides reinforcing writing skills, Santa For A Day says composing the letters helps the children “author a different, more positive narrative about life — one sparked by optimism and the vision of a brighter future.”

And so, yes, Evanston can be just about as cold as the North Pole in winter. But also, there’s a way here to warm the heart.