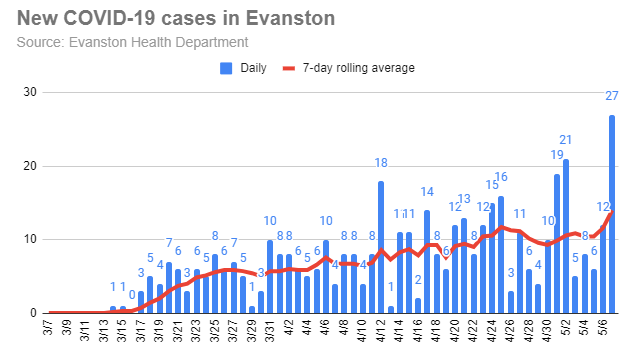 On a per capita basis Evanston now has slightly more cases than the statewide average while Chicago’s case rate is roughly twice the state average.

The state reported the second highest daily test count of the pandemic — with 17,783 new tests. The positive result rate for today was 14.9%, the second lowest daily rate so far.

NPR reported today on a new study by researchers at Harvard University that says Illinois should be performing a minimum of just under 45,000 tests per day before it could safely phase out social distancing measures.

That’s roughly three times the average the state has hit in recent days.

Other models cited in the Harvard study suggest the state needs to conduct either 64,000 or 96,000 tests each day.

Asked about the new study at his news conference this afternoon, Gov. J.B. Pritzker said every state in the nation needs to ramp up testing, but said Illinois is testing at the second highest rate among the 10 most populous states and is continuing to increase its testing.

He said he believed that by also carefully tracking hospital utilization rates and new case counts the state could set a path toward a gradual reopening and return to work, despite the limited testing capability.

He also said that a new system for handling unemployment claims from gig-economy workers and the self employed would go into operation on Monday.