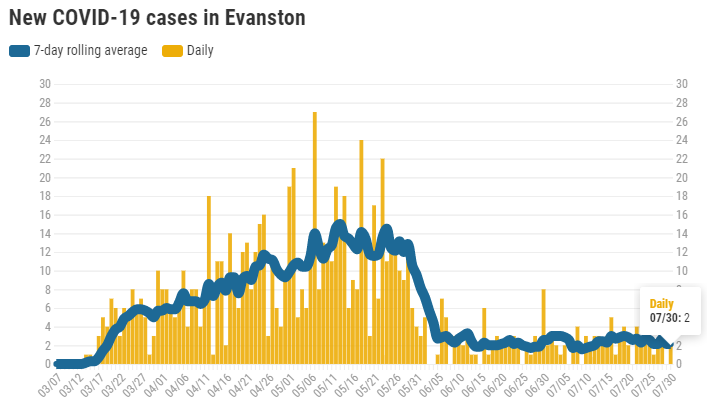 The state’s count of 1,772 new cases was the biggest one-day number reported since the 2,362 cases reported on May 23 and was another sign that weakened control efforts may be leading to a resurgence of the deadline disease.

Evanston’s case count today rose to a total of 861, while the death toll here remained unchanged for nearly three weeks now a 71.

The Illinois Department of Public Health reported COVID-19 test results from 41,134 state residents today, the largest test count since last Friday. The positive test rate today was 4.3%, the highest its been since early June. The seven-day average test rate today stood at 3.8%

The IDPH reported test results for 229 Evanston residents today and said it found three new cases for a positive rate of 1.5%. Two of the new cases were in the north Evanston 60201 ZIP Code, the other one in the south Evanston 60202 ZIP Code.