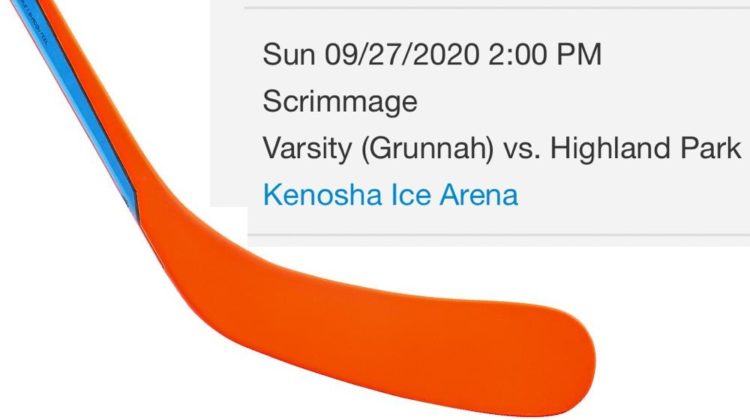 A hockey stick with a detail from the youth hockey program schedule.

Ice hockey, along with football, lacrosse, wrestling, and several other sports, are considered “high risk” activities by the Illinois Department of Public Health. To minimize the spread of COVID-19, the state is only allowing no-contact practice and training for those sports.

Evanston High School Hockey practices at the Robert Crown Center in Evanston. However, the group’s high school team had a game on its schedule this past Sunday in Dyer, Indiana, and has a scrimmage listed this Sunday in Kenosha, Wisconsin.

Indiana and Wisconsin both allow hockey, a game which, according to the bylaws of the Wisconsin Amateur Hockey Association, “can be very physical.”

In a statement sent to Evanston Now, Evanston High School Hockey, which is not affiliated with Evanston Township High School, said it “follows the guidance of USA Hockey”, the sport’s national sanctioning body. The statement says according to USA Hockey, “medical experts have confirmed that with taking appropriate precautions, it is safe to play hockey.”

USA Hockey outlines such precautions on its website, and also says the organization’s chief medical officer, Dr. Mike Stuart, of the Mayo Clinic, agrees that hockey can be played safely in the current environment.

Because of that, Evanston High School Hockey says that “like many other Chicago area high school clubs in various sports,” it is “not prohibiting its teams from playing in optional out-of-state games, provided the teams follow local health and safety protocols in those states.”

However, the Amateur Hockey Association of Illinois, the state arm of USA Hockey, says on its website, “AHAI is not recommending associations/clubs or teams travel outside the state of Illinois.” There is no ban, however, on such travel. John Dunne, the association’s executive director, said it is not unheard of. “Wherever these teams are finding ice,” Dunne told Evanston Now, they’re going out of state to play.”

There is an effort to get hockey competition back on Illinois ice. An online petition drive, from a group called restoreyouthhockey.org, has gathered more than 12,000 signatures, asking Gov. J.B. Pritzker to designate youth hockey as a low risk sport.

Besides minimizing the medical risk, the petition says kids need to be with other kids in an era of remote school. “Having a hockey team will be a natural social pod with the same kids over a six-month period and critical for their social and emotional development,” it states.

There is something curious about how EHSH has handled out of state scheduling information on its website. The Sept. 20 game in Indiana, which had been on the site, is no longer there. And the Sept. 27 event in Kenosha, against another Illinois club from Highland Park, was originally listed as a “game.” But after Evanston Now started asking questions, the “game” was changed to a “scrimmage.” EHSH refused to answer any questions about why the website was changed.

Hockey, even a scrimmage, can have “close contact,” according to Dr. Sadiya Khan, an assistant professor of medicine at Northwestern University’s Feinberg School of Medicine, specializing in cardiology and epidemiology.

Khan said there is a “good reason” hockey is considered a “high risk” sport, because even if the players are wearing masks, she said, there is still not enough protection from the potential of catching or passing along COVID-19.

If someone on a hockey team comes down with COVID, she said, “it could lead to an unmitigated spread” of the disease.

That is what happened in the same state where EHSH is heading. Media reports say 13 people tested positive for COVID, which was traced to a hockey tournament in Ashland, Wisconsin, in June. People going home from that event even spread the illness in Michigan and Minnesota.

Khan said she’s also worried about the perception that young people “recover and are done,” if they do come down with COVID. “There is concern there could be longer-term health effects when kids and adolescents are exposed,” effects which might not show up for a long time.

There’s one more issue regarding the local hockey club’s next stop — Wisconsin. Chicago just put that state on the quarantine list, meaning anyone who comes into Chicago would have to isolate for 14 days, because of what Chicago Health Commissioner Dr. Allison Arwady called “very poor control” of the virus in Wisconsin.

Evanston hockey is not impacted by the quarantine order. First of all, they will not be in Wisconsin overnight, which would trigger the quarantine rule. And unlike Chicago, Evanston does not have any quarantine list for travelers from other states.

But it is something to mull over. “I hope that when people see this news about Wisconsin, they think twice about going to Wisconsin right now,” Arwaday said.