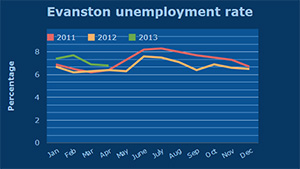 The number of Evanston residents without jobs declined slightly in April as a few more people found work.

Figures from the Illinois Department of Employment Security show that 6.8 percent of Evanston's workforce was jobless in April, down from 6.9 percent in March.

Twenty-nine more people found jobs in the month, and 14 fewer people were looking for work.

The jobless rate for the tri-state Chicago metro region saw a bigger drop, falling from 9.5 percent in March to 9.1 percent in April.

The statewide rate fell even more, from 9.4 percent in March to 8.7 percent in April.

Twenty of the nearly 100 towns in Illinois with more than 25,000 residents had lower unemployment rates than Evanston in April. That number was up from 14 in March. And, reflecting the sharp decline in the statewide unemployment rate, more downstate towns made the list in April

Highland Park had the lowest jobless rate at 5.1 percent. followed by Vernon Hills at 5.6 percent and  Normal at 5.7 percent.