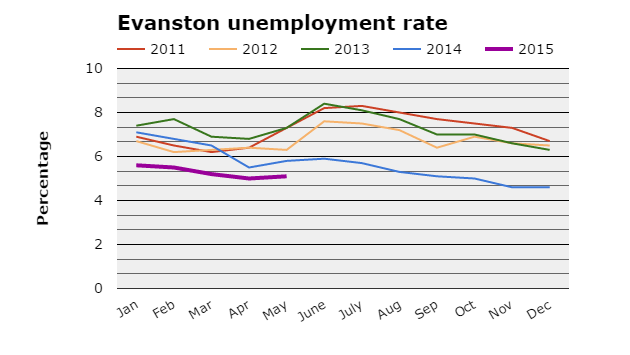 Evanston's jobless rate edged up in May to 5.1 percent from 5.0 percent the previous month. But the rate was still down substantially, from 6.0 percent a year ago.

Figures from the Illinois Department of Employment Security also showed a slight increase last month in the jobless rate for the Chicago metro area, now at 5.8 percent, and the state as a whole, now at 5.6 percent.

Evanston's ranking among the just over 100 towns in Illinois with more than 25,000 residents remained unchanged last month — with 41 towns having lower jobless rates.

The lowest jobless rate in the state last month was 3.5 percent in Highland Park, while Wilmette was at 4.6 percent, Glenview at 4.7 percent and Skokie was tied with Evanston at 5.1 percent.

The highest jobless rates in the state last month were in Harvey, at 11.5 percent, and Dolton at 10.5 percent.