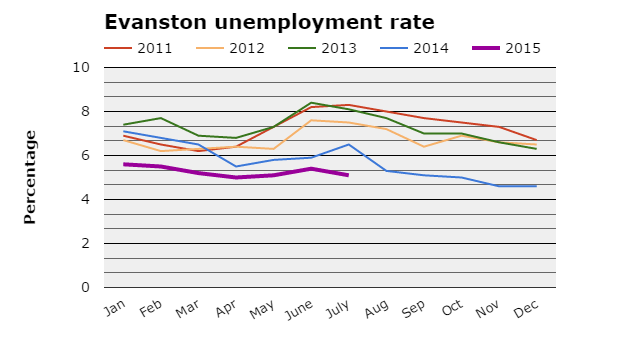 Evanston's jobless rate fell in July to 5.1 percent, close to its lowest level for the year, and down 1.4 percentage points from a year ago.

Statewide the rate was unchanged last month at 5.9 percent, while the Chicago metro rate dropped slightly, to 5.9 percent from 6.0 percent. A year ago, the Illinois Department of Employment Security says, the state and Chicago metro jobless rates were both 7.3 percent.

Highland Park continued to have the lowest jobless rate at 3.8 percent, but that was up from 3.6 percent in June.

The next lowest rates for July were 3.9 percent in Vernon Hills and 4.3 percent in St. Charles.

Wilmette's jobless rate was 4.4 percent. Skokie's was tied with Evanston and nine other communities at 5.1 percent.