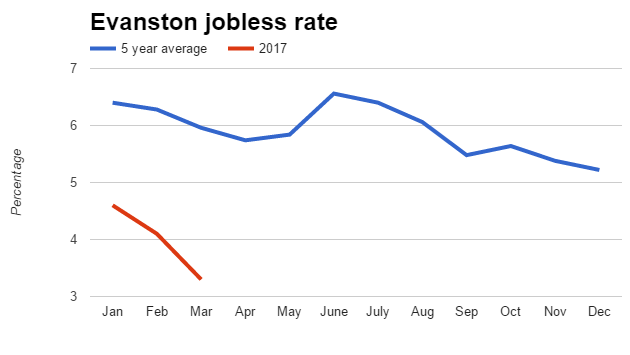 Figures released today by the Illinois Department of Employment Security show the rate is down from 4.1 percent in February and 4.9 percent a year ago.

Joblessness for the Chicago metro area was also down dramatically, to 4.5 percent in March from 5.3 percent in February and 6.3 percent a year ago.

Statewide the jobless rate was 4.7 percent in March, down from 5.5 percent in February and 6.4 percent a year ago. The statewide rate was at its lowest level since 2007.

In Evanston last month 261 more people had jobs than did in February, but the number of people in the labor force declined by 26.

Fifteen of the 107 Illinois communities with more than 25,000 residents had jobless rates lower than Evanston’s in March. That’s down from 23 in February.

The state’s lowest jobless rate last month was 2.8 percent in Wilmette. Glenview was one of four towns tied at 3.0 percent. Arlington Heights was one of eight communities at 3.1 percent. Skokie was tied with Evanston and four other towns at 3.3 percent.