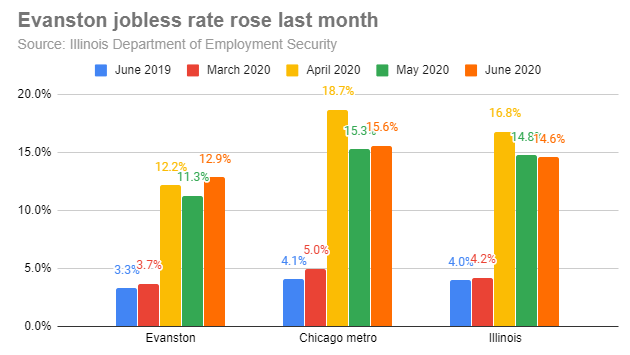 Evanston’s jobless rate rose to 12.9% last month, the highest level of the coronavirus pandemic, according to figures released this noon by the Illinois Department of Employment Security.

The jobless rate had fallen to 11.3% in May, based on revised numbers from the IDES, after hitting 12.2% as the pandemic took hold in April.

A year ago the jobless rate here was just 3.3%, a little more than a quarter of what it is now.

By contrast the Chicago metro area saw a much smaller increase last month and the statewide jobless number dropped a bit, although the share of people out of work remains lower here than the metro or state average.

So, while the city had a substantial net increase in jobs in June, that still left more jobseekers unable to find work than the month before.