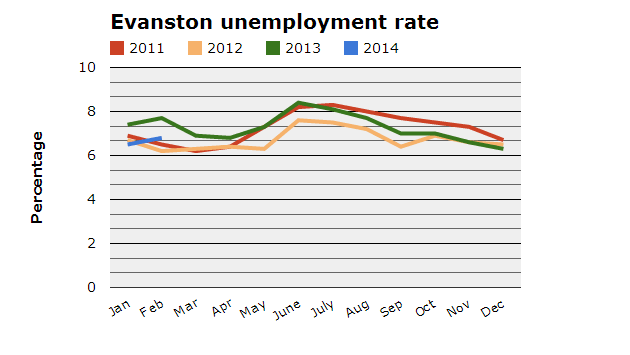 The jobless rate in Evanston is on the rise again — moving up from 6.3 percent last December to 6.8 percent in February.

The Illinois Department of Employment Security says Evanston's workforce grew to 41,599 in February, up by just 20 people since December, while the number of people seeking work rose by 201, to 2,826.

Of the roughly 100 communities in Illinois with more than 25,000 residents, 17 had jobless rates lower than Evanston in February — led by Glenview with a 5.7 percent rate, Northbrook with a 5.9 percent rate and Glen Ellyn with a rate of 6.0 percent.

The rate in Wilmette was 6.1 percent, while it was 7.2 percent in Skokie.