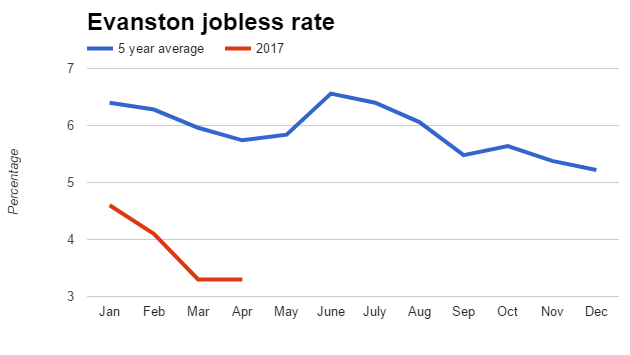 Figures released today by the Illinois Department of Employment Security show the 3.3 percent rate for Evanston — the lowest level in more than six years — was down from 4.9 percent a year ago.

Eighteen of the 107 Illinois communities with more than 25,000 residents had jobless rates lower than Evanston’s in March. That’s up from 15 in March.

The state’s lowest jobless rate in April was 2.9 percent in Wilmette. Mount Prospect was at 3.0 percent. Glenview and Highland Park were among four towns at 3.1 percent. Northbrook and Naperville were among a dozen towns tied at 3.2 percent. Skokie was at 3.6 percent.