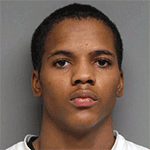 Park Ridge police have arrested and charged an 18-year-old Evanston man with stealing a car there Thursday afternoon with a 5-year-old boy sleeping in the back seat.

Police say that based on a variety of tips from the public they took Deangelo Fountain, 18, of 1315 Fowler Ave., into custody for questioning Thursday evening.

At a news conference this morning, Park Ridge Police Chief Frank Kaminski, who formerly was police chief in Evanston, said Fountain was known to them from other car burglaries in the area.

Kaminski said Fountain saw a 2012 Audi Q5 parked and running outside a home in the 1700 block of Good Avenue shortly after noon Thursday, jumped in the driver's seat and drove away as 5-year-old Drake Whitker's mother pounded on the door, pleading with Fountain not to do it.

The car was found about two hours later abandoned in a Skokie alley with Drake still inside.