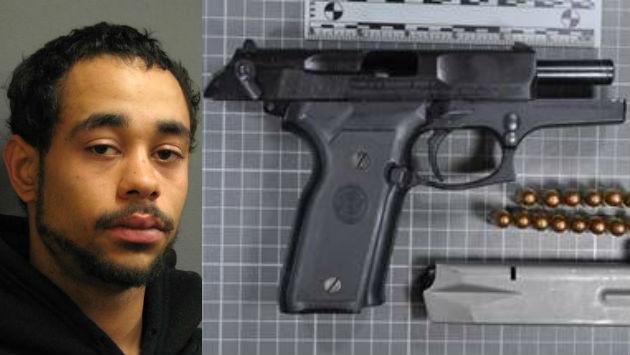 An Evanston man, pulled over Wednesday in the 2300 block of Emerson Street for a minor traffic violation, was found to be in possession of a handgun that was reported stolen in Waukegan, according to Evanston police.

The suspect, identified as Tyrone E. Gibbs, 24, of 2116 Emerson St., attracted the officer’s attention by continuing to look down towards the floorboard of the vehicle, according to EPD Cmdr. Joseph Dugan.

As Gibbs exited the vehicle, police said, a loaded Stoeger 9 mm handgun was recovered from under the front drivers seat. A check of the handgun revealed it to be one stolen earlier in Waukegan, Dugan said.

Gibbs was transported to EPD headquarters and charged with aggregated unlawful use of a weapon, possession of a stolen firearm, two counts of no valid firearm owner’s identification card, plus two traffic violations, Dugan said.