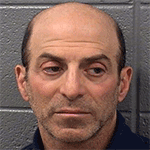 A 53-year-old Evanston man has been charged with sexually abusing a 14-year-old boy he met through Craigslist.

Jonathan Labe, 53, of the 900 block of Reba Place, was ordered held Saturday in lieu of $50,000 bond, according to the Chicago Tribune.

The Sun-Times says prosecutors claim Labe put an ad on Craigslist seeking sex with an 18-year-old. The youth responded, and in an exechange of text messages admitted he was under 17. But, the prosecutors say, Labe still arranged to have the boy go to his home, where he engaged in sex acts with him on two days last October.