Mayor Elizabeth Tisdahl announced Monday that the city's Board of Ethics has dismissed complaints surrounding the rezoning of the Kendall College site.

And, in view of the ruling, she barred further discussion in the council's public comment period about the issue.

That decision didn't sit well with the two residents who have complained about the Kendall decision at every council meeting for over a year — Padma Rao, and her mother, B.K. Rao. 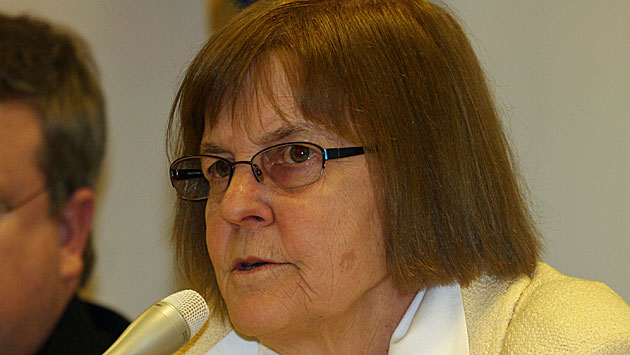 Top: Padma Rao objecting to the mayor's ruling. Above: Mayor Tisdahl, who praised Alderman Fiske for her role in saving many of the trees at the Kendall site.

The Rao's both tried to speak on the issue again, and kept talking even after the mayor had ruled them out of order and shut off the microphone at the podium where they were standing.

B.K. Rao suggested the ethics panel was a joke and its ruling was meaningless.

The council's rezoning of the Kendall site for single family homes preserves most of the trees on the property, but the Rao's have bitterly complained that some trees will be removed to permit construction of the homes.

They also claimed that Alderman Judy Fiske, whose 1st Ward includes the Kendall site, had improperly met with the project developer and that she had a conflict of interest because her son works for a law firm that has represented the developer.

As the dispute dragged on through the year since the council approved the latest Kendall plan, the Raos also expanded their list of grievances to include other aldermen who had criticized them or attempted to meet with them to discuss the situation. 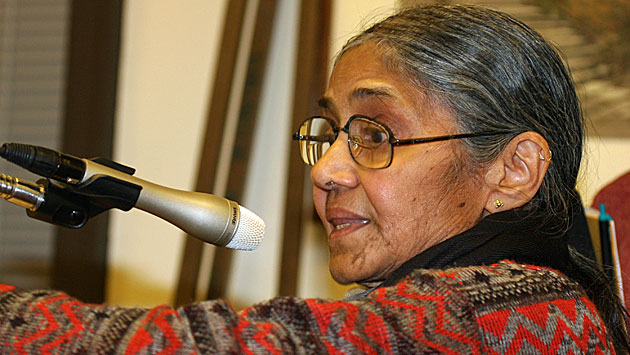 B.K. Rao speaking Monday night despite having her mike turned off by the mayor.

Last night the Council meeting was briefly thrown into disarray as B.K. Rao continued to speak after the mayor had asked Alderman Ann Rainey, 8th Ward, to start the next item of council business, reading the consent agenda.

Rainey proposed adjourning the meeting, Tisdahl called a 10 minute recess, and some aldermen started to leave the council chamber before Rainey eventually was able to start reading the agenda after a couple of minutes when B.K. Rao stopped talking. 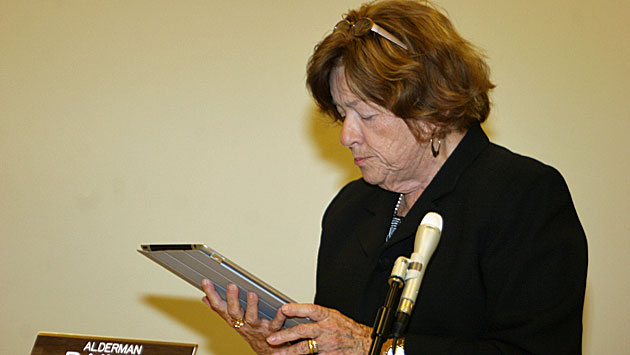 Rainey reads the consent agenda from her iPad.

Redevelopment of the Kendall site has been an issue for most of a decade, since the culinary college closed its Evanston campus and moved to Chicago.

Several plans for redeveloping the block that once held the school's dorms and classroom buildings with multi-family housing were fought at length by a large group of neighbors who eventually persuaded the developer to adopt a plan for single family homes instead.

That proposal eventually won the support or at least acceptance of the vast majority of neighbors who had initially opposed the project.

But with the decline of the housing market, the original developer, who paid to demolish the college buildings, eventually sold off the site. Despite revisions to the site plan, the current developer has yet to construct any new homes on the property.

Update 2:55 p.m.: Evanston Now has received a copy from the city's law department of the advisory opinion issued by the Board of Ethics.