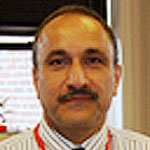 The City of Evanston announced today the appointment of Homayoon Pirooz, P.E. as the new Engineering Division Manager/City Engineer in the Public Works Department.

He began working for the city Monday. Pirooz comes to Evanston from the City of Ann Arbor, Mich., where he served as Project Management Services Unit Manager since 2000 and Street Administrator since 2005.

“Mr. Pirooz brings a high level of qualifications and professional knowledge to the Evanston community and we are looking forward to putting his skills to work here as we continue to make Evanston the most livable city in America,” said City Manager Wally Bobkiewicz. “I would also like to thank Senior Engineer Sat Nagar for his outstanding efforts filling this role on an interim basis.”

Pirooz has held a variety of engineering posts in Ann Arbor since 1982. He led the process and introduced the community to new technologies that improved the city’s infrastructure, including pedestrian refuge islands, modern roundabouts, pedestrian count-down signals and pedestrian rapid flashers.

He also secured millions of dollars in transportation, stimulus and other federal and state grants, including nearly $16 million for funding the construction of East Stadium Bridges, which connect the east and west sides of Ann Arbor on one of the most traveled corridors in the area.

The City of Evanston’s Engineering Division is responsible for street resurfacing and reconstruction; traffic and parking studies amd managing the city's Neighborhood Traffic Calming Program, which places traffic circles, speed humps, speed bumps and other devices which reduce the speed and volume of traffic in our neighborhoods.

It also monitors and corrects of high accident locations; maintains all traffic signals and street lights; and develops and implements signal timing plans and other measures to ensure the safe and efficient flow of traffic.