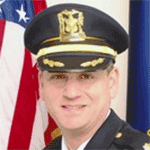 The promotion is effective Jan. 12. Parrott will oversee the department’s Investigative Services Division, filling the position vacated by Deputy Chief Joe Wazny, who was named police chief in Manhattan, Ill., earlier this week.

“Cmdr. Parrott is a long-serving veteran of the Evanston Police Department, and has served with distinction in many units," Eddington said. "I look forward to working with him in his new capacity."

A 25-year veteran of law enforcement, Parrott joined the Evanston department in 1992 and has worked in the patrol division, tactical bureau, NET unit and detective bureau as a police officer, detective and supervisor.

As commander, Parrott supervised patrol shifts and community policing, and currently serves as the department’s spokesman and executive officer.

Parrott earned a bachelor's degree in law enforcement administration from Western Illinois University in 1990 and is pursuing a master’s degree in business law at Loyola University.

He has completed Northwestern University’s School of Police Staff and Command along with the Federal Bureau of Investigation’s National Academy in Quantico, Va.